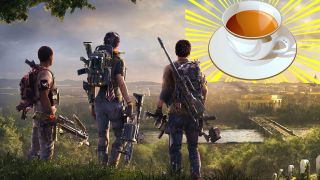 The idea of games that are always-online certainly isn't new, but the fact that we've had two triple-A games of this type launch in two months alone suggests that it's going to become even more commonplace in the industry in the coming years. And although I'm all for a world filled with games that are constantly evolving, adding new content and fixing existing problems, there's one thing that's going to become a serious problem for long gaming stints – the death of the pause menu.

In games like Anthem, Destiny 2, and The Division 2, unless you're resting somewhere safe like their respective hub zones – Fort Tarsis, The Tower and the White House – doing anything that takes you out of the action for more than a few seconds basically means you're risking getting shot in the butt.

The Division 2 is a prime example. Having now spent more than 100 hours with the game, I've lost count of the times where I've nipped into the loadout menu in the middle of a street to see whether the latest bit of gear I've got is going to push my Division 2 endgame Gear Score up another notch or two. The problem is, it's easy to forget in a quiet side street that nothing ever sleeps in D.C. – particularly in the constantly evolving and changing post-pandemic Washington DC. There's always some guy with a gun just around the next corner, which means the moment you take your eye off the action, dabbling in loadout menus, or checking the map to see where to go next is a risk. The next thing you know, the whole screen is shaking with the bullet damage you're receiving as you stand there like a target practice dummy.

This is an issue that can be found in across almost all of the always-online games available today. There's never any respite , unless you've first deposited your character in the safe zone. That might sound ridiculous, but I'm sure like many other gamers, when I settle down for a long play session, it will usually be accompanied by one of two things – tea, or several large glasses of wine. Regardless of whether you share my particular tipple preferences, we're all going to end up at the same point eventually: needing to use the bathroom.

There's nothing worse than leaving your character happily idling away while you nip off to the toilet only to find that it's a corpse when you get back. Of course, it's nothing that a quick respawn won't fix, but it does raise the question about how developers are going to deal with the call of nature – or the need to refill one's glass/stomach – going forward.

Now you might dismiss all this as the ramblings of a woman with a wine problem/someone who pees too much. But hear me out. The more always-online games the industry generates, the more players are going to call for more of these safe spaces like Destiny's Tower, or the various settlements and safe houses of The Division 2. But the lack of a pause screen comes when you're fighting through a particularly long mission, a Destiny 2 Raid for example, or a Division 2 Stronghold, or an Anthem… oh wait, there are plenty of loading screens in that for a quick nip to the bathroom. It's in these long missions that you're praying for the ebb and flow of combat, which works in your favour when you're playing with friends who appreciate the need for a quick break every now and then, but becomes more of an issue when matchmaking with random strangers. The Division 2 has proved lucrative for finding awesome combat friends for taking down Invaded missions and other end-game content when my fellow agents are occupied elsewhere, but they're always ready to push through to the next objective as soon as possible. No drink refills or nature calls there.

It's an interesting shift from other always-online games like Fortnite, Apex Legends or more traditional multiplayer experiences like Call of Duty: Black Ops 4 or Battlefield 5, where matches tend to revolve around a 20-30 minute gameplay time with a boot back to lobby at the end of each rotation. It's much more tailored to that pick up and play mentality, where you can just jump in between doing the things you need to do at home.

But for now, I think always-online games are going to rely more and more on these safe spaces to negate the need for a pause menu. Whether that's a particular bugbear that's only unique to my personal play style, or I'm speaking to the masses here, I for one am going to be lamenting my pause screens for years to come.

Hey, at least with the Switch I can take it with me.

For more 'goodness' on live service games, why not check out our extensive Division 2 guide hub where you'll find all the guides, features and more. Or you could watch our guide on how to level up fast in The Division 2 instead below: