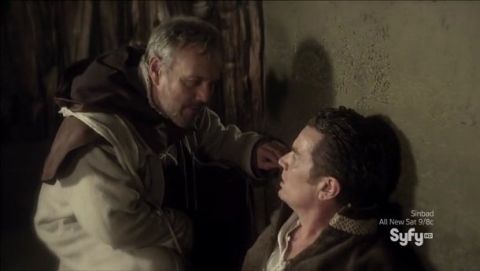 THE ONE WHERE Pete, Myka, Charlotte and Sutton (yay!) track down Paracelsus to prevent Claudia crumbling into bronze dust.

VERDICT Well played Warehouse 13 , casting James Marsters and Anthony Head in the same season, as brothers no less, was a fan-pleasing stroke of genius. The Buffy pair don’t share a great deal of screen time together, but when they do butt heads “All The Time In The World” perks up no end. Having them act together does the show something of a disservice by inviting comparison to Joss Whedon’s vampire-slaying opus (and Warehouse 13 was never going to come out of that comparison well), in particular the dialogue can’t hold a candle to the witty repartee Spike and Giles shared, but hints of the old magic do seep through.

Speaking of magic, Anthony Head’s Paracelsus is turning out to be a little bit more “cackling megalomaniac” than I would have hoped. Head is clearly having a cracking old time wearing trendy wizard robes and waving his magic stick around (that’s not a euphemism), but the character is so broad Head’s charisma and past glories are shouldering all the weight. There’s a potentially interesting angle to the character – is he committing all these atrocities to push forward the boundaries of science for the benefit of all mankind, or simply for his own selfish reasons? But the show seems unwilling to explore that avenue, for now.

As is often the case with Warehouse 13 , the best segment this week is also the silliest: Sutton has been posing as a Russian businessman, and is running a lonely hearts con on a wealthy Russian duchess. Marsters doesn’t get to have quite as much fun with Sutton as he did during his first appearance this season, way back in episode 11, but he shines in any scene with Charlotte, particularly during the bedroom scene, which plays out like a moment from a classic screwball romance, with a Warehouse twist. It’s a shame to see Charlotte bumped off quite so soon after being “reunited” with her husband, particularly as I was really hoping whiny old Nick would take the bullet, but as far as the narrative is concerned Charlotte has run her course anyway.

Back at the Warehouse a dodgy CG Claudia slowly crumbles while Jinks and Artie scramble for a way to save her. There are some lovely little exchanges (see BEST LINE below), but otherwise these scenes are intriguing for one reason – who did Artie get the DNA to save Claudia from? And why did he have such easy access to it? There’s also some caretaker drama going on in the Warehouse. Paracelsus’ return and rapid increase in power means he is taking Mrs Frederic's place, with potentially fatal consequences for Mrs F. It’s not explained very well (and confused further by the reveal that Abigail is The Keeper, the holder of Warehouse knowledge even the Regents aren’t privy too), plus it’s puzzling why the Warehouse 9 agents didn’t disconnect Paracelsus from the Warehouse back in the day, but it adds another layer of drama to the story going into the finale.

UNANSWERED QUESTION Given Abigail was Leena’s direct replacement, you would expect that Leena was the former Keeper, but if there’s only one Keeper a lifetime that means either she wasn’t, or Abigail was only activated on Leena’s death. In which case did Abigail know she was next in line? Or if Abigail was the Keeper all along, why keep her away from the Warehouse for so long?

USE THE FORCE, PETE Despite demonstrating geek-friendly taste in the past, Pete refers to Paracelsus as “Senator” Palpatine, rather than “Emperor”. Does that mean… he prefers the prequels?! Pete, you got some explaining to do.

KEY ARTIFACTS
• Philosopher’s Stone – Bestows immortality or mortality when used in conjunction with…
• Copper Bowl – The correct alchemical formula and a significant human sacrifice is also required.
• Bronze Stele – The key component of the Warehouse’s Bronzer. When used outside of the Bronzing Chamber it results in unstable bronzings.
• Barry Seal’s Radio – Allows two people to communicate over any distance or through any obstacle.
• USS Squalus binnacle – removes the oxygen from an area and stores it for later use.
• Genghis Khan’s Mace – Absorbs energy (like electric bolts) and redistributes it elsewhere.
• Coleridge’s fishing net – paralyses anyone caught in it.
• Folsom Prison ball and chain – attaches to shadows and keeps a person in a specific area.
• Queen Ka'ahumanu’s Lei Niho Palaoa – Holds the memories of past Warehouses that only The Keeper can release.

BEST LINE
Steve: “Are you okay? Over.”
Claudia: “You mean aside from being the Tin Man in a bronze production of The Wizard of Oz ? I'm just peachy. What's going on? Where's Paracelsus and why am I melting?”
Steve: “Well, technically, you're crumbling.”
Claudia: “I'm working a Wizard of Oz motif here, Steve. God, why am I gayer than you?”

Read all our Warehouse 13 Season 4 Reviews so far here.