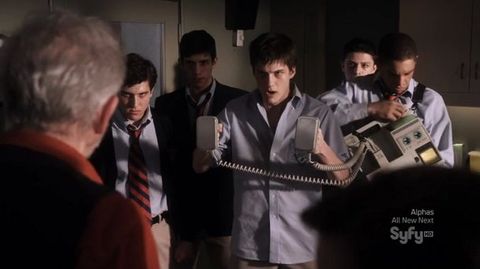 THE ONE WHERE Pete and Claudia team up with Hugo Miller to track down his lost marbles while Myka and Jinks tackle a jazz musician with the serious case of the blues.

VERDICT Warehouse 13 is no stranger to schools (“Nevermore”) or artifacts that send groups of people a bit mental (“Queen For A Day”), or musicians with artifact-related afflictions for that matter (“Insatiable”); which means they must have had a really good reason to revisit all three in “There’s Always A Downside”, right?

The two artifact-related mysteries (missing marbles and a calamitous cigarette case) are hugely underwhelming, particularly the one featuring Jazz musician Ethan, which amounts to people chatting in a doctor’s office, then a bar for a bit, then finding the artifiact they were looking for in Ethan’s pocket. No wonder Myka seems to have turned up to work in her slacks this week, she must have known she wouldn’t be breaking a sweat.

It’s redeemed slightly by a sincere (albeit pantomime-wheezy) performance by Being Human ’s Sam Huntington, though he’s not even this episode’s best guest star.

Rene Auberjonois returns as former Warehouse Gatherer Hugo Miller with a fun, frivolous, fittingly silly appearance. This half works much better, primarily because of the interplay between Pete, Claudia and Hugo, though again the artifact hunt falls short, resorting to the tired “defuse a device at the last second” trick. Dividing their time equally between two cases this week did both a disservice.

And while we can admire the writers for trying to mix up the group a little, the simple truth is that Myka and Jinks are a little flat as a pairing. The episode is easily at its best during the opening and closing scenes when the gang are together in the Warehouse. If this season of Warehouse 13 has taught us anything so far, it’s that character, not drama, is still its strength.

SPINELESS I’m getting increasingly bored by the Artie/Brother Adrian subplot. At least there’s finally some development this week. At the moment I can’t help but feel Brent Spiner is a wasted presence.

DID YOU SPOT? The Tilson Academy’s version of Facebook is called FaceUnion.

REFERENCE Claudia’s line “Let’s not have a brain tumour for breakfast” is a reference to classic black comedy Heathers , though you probably guessed that after Claudia repeated the name five times beforehand.

IN-JOKE The Tilson Academy is named after co-producer Gregg Tilson.

LMAO
Claudia: “ What's up, Jinxy? Why you wearing a serious face?”
Steve : “I keep telling you guys, this is just my face. I'm contemplative.”
Pete : “I don't know. I'd say it's more constipatitve.”

BEST LINE
Pete: “ It’s usually much wowier than that.”