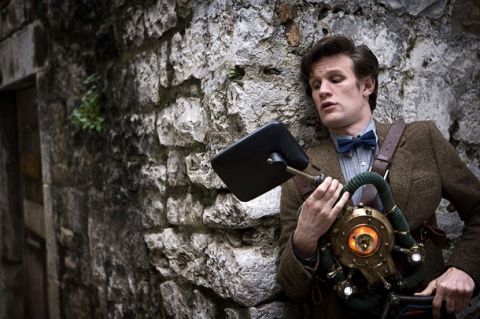 Doctor Who 5.10 "Vincent And The Doctor" – did it create a good impression?

THE ONE WHERE: There’s something nasty in the alleyways of 19th Century Provence and only a Time Lord and a troubled post-Impressionist can stop it…

VERDICT: “Is it too much?” asks the Doctor, voicing the fear of anyone with an instinctive dread of Richard Curtis’ penchant for the emotional blitzkrieg. And yes, perhaps Bill Nighy’s closing hymn to Vincent is an unnecessary extra assault on the tearducts in a scene already firmly squeezing your heart. But no matter – this is a genuinely magical episode of Who , high on atmosphere (the cobbled, monster-bothered night-streets of Provence) and bursting with charm (just watch Smith and Nighy bonding over their bow-ties, all Four Weddings English awkwardness). It’s reliably witty, of course – Curtis’ Doctor is a riot, whether namedropping that “ghastly old goat” Picasso or lamenting, “Is this really how time passes? Really slowly, in the right order?” – but there’s a striking note of melancholy, too. The Doctor’s revelation that Vincent will shortly take his own life casts a shadow the episode never escapes, but it’s a shadow that gives the redemptive ending in the Musee d’Orsay its heart-clenching power. A word of praise for director Jonny Campbell, too: the gorgeous shot of Amy in the garden with the sunflowers deserves to be framed. And he makes van Gogh a gunslinger as he prepares to face the monster, silhouetted like a Leone hero in hat and coat and reaching for his trusty brushes… Lovely touch.

HIGHLIGHT: The sublime moment when the power of Vincent’s vision transforms the sky into the swirling cosmos familiar from his 1889 masterpiece “The Starry Night”.

TRIVIA: That’s the National Museum Of Wales doubling for the interior of the Musee d’Orsay in Paris. The giveaway is the statue of Perseus and the severed head of Medusa. Haunted my childhood, that did.

TUNE: That's “Chances” by Athlete playing over the climax. Get thee to iTunes.

DID YOU SPOT?: Amy mentions that the Doctor has recently taken her to Arcadia. In series two’s “Doomsday” the Tenth Doctor revealed that The Fall of Arcadia was a pivotal incident in the Time War.

HMMM: That’s the third time an image of the First Doctor has appeared this season. And can it be coincidence that the dialogue also references a “reign of terror”, a classic Hartnell tale from 1964?

INFLUENCES: The title is – probably – a play on 1990’s Vincent And Theo , a bio-pic of van Gogh that starred Tim Roth.

BEST LINE:
The Doctor: “It’s a thing. It’s like a plan, but there are more grey bits.”