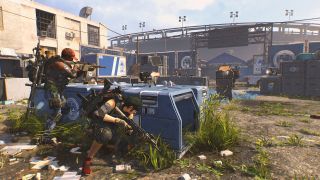 The Division 2 developer Massive Entertainment recently delayed the game's first raid to make room for a "large amount of balance changes," and after the studio's latest State of the Game live stream, we have a good idea of what those changes look like. Through in-progress updates which will initially roll out on The Division 2's public test server, Massive is working to buff high-end gear and mods, add a Recalibration Score separate from Gear Score, and make crafting materials, blueprints, and ammo more plentiful.

Let's start with the big one: Recalibration Score. Currently, when you recalibrate an item by transferring an attribute over from another item, you run the risk of lowering that specific attribute. If you have a purple-grade gun with 10% bonus damage, for example, that value may drop to like 7% if you move it to an orange-grade gun. That's a super ballpark example, but you get the idea. Due to the way recalibration potential is calculated and capped, stats don't always transfer perfectly.

To make recalibration more rewarding and intuitive, Massive is giving it its own stat: Recalibration Score. "When you move a stat, that Recalibration Score increases but the Gear Score stays the same," game designer Rasmus Künstlicher explained on stream. "You can't go to level 515 anymore, but instead you can get that Recalibration Score all the way up to 100 [per slot, per item]. That means most of the time you'll be able to move stats over wholesale. You can still hit a cap if you find two items with really skewed rolls and you move a high roll to a low slot, but it will be much rarer, and doing so would be a feat."

In other words, this change dramatically increases the growth potential of high-end items, and as Künstlicher put it, "that means you can make stronger items in general." With Recalibration Score being separate from Gear Score, recalibrating items will no longer increase their level. However, Massive says level 515 gear is coming. You can already get some 515 gear via the Dark Zone on the PTS, and more sources will be added soon. Massive's Hamish Bode affirmed that "we would never want to make it so you have to go into the Dark Zone" to get the strongest gear.

Other mod changes include the addition of a new type of skill mod: batteries. "These come with skill power for a specific skill," Künstlicher said. "So you can get a drop that's a battery for your turret that gives your turret skill power. You can equip that in one of the mod slots - it can go in any slot. And then you get the skill power but you also sacrifice a slot. But if you have some kind of hybrid build, it might be worth it to spend one or two mods to get that extra skill power if you can equip a third mod that's way better for you." Skill batteries can be obtained as normal drops and via crafting, and the skill power they provide should make other mods more accessible at higher levels.

Speaking of crafting, it's getting some boosts as well. For starters, a new crafting vendor at the White House HQ will sell crafting materials and blueprints to save you some grinding. You'll also be able to earn more project blueprints: three per week (up from one), with an additional blueprint available each day through daily challenges. As an added bonus, the cap for gray crafting items is being raised from 400 to 600. Oh, and while it's not crafting-related, Massive mentioned one more upcoming quality-of-life change: more ammo drops, just in case you were running dry in heated firefights.

Most of these changes will be put through The Division 2 public test server before they come to the main game, so they may be tweaked further before their official release. That said, they sound like pretty good changes on paper, even if the addition of Recalibration Scores will make your inventory that much harder to parse. It's also encouraging to see the PTS getting some real use, and these quality-of-life improvements should make the wait for Operation Dark Hours a little less painful.

Ahead of these updates, here's everything you need to know about The Division 2 endgame.