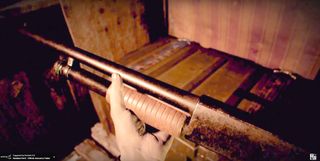 While we're waiting for an update to the Resident Evil 7 demo Capcom have released the two super short micro-trailers. Here's the first, simply called 'Mysterious Caller':

The main thing to take away from that is that there are three different phones in different settings (one appears twice for a close up). We've already had a series of phone messages in the Resident Evil 7 demo, so clearly speaking to someone plays a significant part in the game. That first phone looks like it's in a nice, clean family home setting as well, so maybe it isn't murder shacks all the time.

We already knew there would be combat in Resident Evil 7 involving shotguns, pistols and flamethrowers(?) but this is the first hint of anything more threatening than the original demo's hatchet.

Worth noting as well that the opening shot out of the door establishes a new location - some sort of hut outside in a swampy area.

You can see a jetty outside to the left, and what looks like a float (the ball in a net on the right) so it also looks we'll be heading towards water at some point.

We've been promised another update to the Resident Evil 7 Beginning Hour demo before the game arrives in January next year so hopefully we'll get some more info soon. I'm kind of enjoying the mystery though.