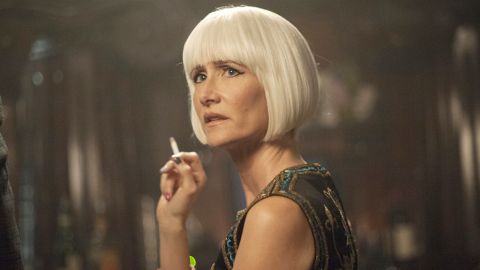 A focused, entertaining episode that gives the story some much-needed momentum.

After the scattered, restless previous episode, Twin Peaks slows down again and focuses on just a handful of storylines—and is all the better for it. We return to the town itself for more than just nostalgic reunions with old characters, and we finally discover the identity of the important character Laura Dern was tipped to play. It’s the strongest episode since that incredible two-part premiere, and it feels like the story is really picking up momentum now.

Dale Cooper (Kyle MacLachlan) is still in a catatonic state, drifting through the life of insurance salesman Dougie Jones. This episode picks up where the previous one left off, with Cooper staring at the shoes of a cowboy-hat wearing statue outside his office. When a police officer (Juan Carlos Cantu) comes to move him along, he instinctively reaches for the badge pinned to the cop’s jacket as if it holds some importance to him. Is he pining for his old pal Harry S. Truman? The statue certainly looks like him. Or are the memories of Coop’s former life as a law enforcer slowly trickling back into his empty head?

The officer returns ‘Dougie’ to his wife Janey-E (Naomi Watts), who chews him out for his bizarre, distant behaviour. While staring dimly at a pile of insurance papers, Cooper has a vision of MIKE in the Red Room. “You have to wake up,” he says. “Don’t die.” Then strange green points appear on the papers—similar to the lights that alerted Cooper to the fact that Anthony Sinclair (Tom Sizemore) was lying—and Cooper scribbles on the documents, seemingly at random. He also checks in with Sonny Jim (Pierce Gagnon), Dougie’s son, who I can’t help but feel has an important role to play in the show. There’s something about him.

The next day Cooper is back in his familiar black suit and hands the papers over to Dougie’s boss Mullins (Don Murray). At first he’s furious at the ruined paperwork, but suddenly begins to notice a pattern in the mad scribbles and thanks him, stunned. The documents were all signed off by Sinclair, implying that he’s been scamming the company. It seems the otherworldly perceptive powers granted to Cooper by the Black Lodge (well, I assume) have saved his bacon again. But I’m still no clearer about where exactly he’s going or how he’s going to snap out of this interminable daze. After six hours of Dougie, I’ve never been more eager to be reunited with Special Agent Dale Cooper.

Meanwhile, Janey-E meets with the guys Dougie owes money to. Naomi Watts has been superb as the beleaguered Mrs. Jones, but her impassioned rant here is her finest moment so far—and the highlight of the episode. “We drive shitty cars!” she screams at the baffled loan sharks. “We are the 99 percenters!” She gives them $25,000 from Dougie’s casino winnings—five grand more than he borrowed, but 25 less than they were shaking him down for—and they accept. “What kind of world are we living in where people can treat other people this way?” She laments, poking one of them in the chest. “We are living in a dark, dark age.”

But Dougie’s problems are far from over. A diminutive hitman named Ike ‘The Spike’ Stadtler (Christophe Zajac-Denek) is given the order to kill him, along with Lorraine (Tammie Baird), who ordered Dougie’s death herself in an earlier episode. The Spike brutally murders Lorraine with an ice pick (that explains the nickname) and sets off to find his next target. Who ordered the hit, and who exactly is after Dougie and why, is still unclear. But the Mitchum brothers from the Silver Mustang casino are a safe bet. They think Dougie ripped them off, which Bradley (Jim Belushi) seemed to take personally. Honestly, the sheer number of sinister criminals with severe Lynchian faces in this series is starting to get slightly overwhelming.

Which brings us neatly to the town of Twin Peaks, where severe-faced criminal Richard Horne (Eamon Farren) is meeting with a twitchy guy called Red (Balthazar Getty) in an old warehouse. The normally stony-faced, intimidating Horne seems oddly nervous around Red, particularly when he threatens to saw his head off. Red flips a coin and it hangs curiously in the air before appearing in Horne’s mouth, then back in Red’s hand. It seems there’s something supernatural about this guy. Could he be the mysterious ‘magician’ from the ‘fire walk with me’ chant?

Disturbed by the encounter and furious that Red called him ‘kid’, Horne speeds away in a rage, hitting a young boy at full speed with his truck as he crosses the road. Carl Rodd (Harry Dean Stanton), a returning character from the movie Fire Walk With Me, witnesses the aftermath of the hit-and-run, having seen the boy playing with his mother moments earlier. Carl, who seems to have some connection to or awareness of the Black Lodge, watches a ghostly shape rise from the dead boy’s body and disappear into the power lines. It’s great to see old pals Harry Dean Stanton and David Lynch working together again, and I get the feeling we’ll be seeing a lot more of Carl in future episodes.

At the Sheriff’s Department, Hawk (Michael Horse) finally solves The Log Lady’s riddle. She told him a clue related to his heritage would lead him to something related to the Laura Palmer murder case that was missing, and after dropping a coin in the toilet and bending down to pick it up, he notices the stall was built by a company called Nez Perce: the Native American tribe he belongs to. This leads him to some paper stuffed down a crack in the stall door, although the episode ends before we find out what it is. Missing pages from Laura’s secret diary perhaps? Mark Frost’s book The Secret History of Twin Peaks is worth reading to find out how the Nez Perce tie into the series’ mythology.

And let’s not forget about the episode’s biggest reveal. Albert Rosenfield (Miguel Ferrer) visits a night spot in a rainy city called Max Von’s Bar and meets Diane (Laura Dern), the enigmatic assistant Dale Cooper regularly spoke to on his dictaphone. In episode 4 we heard Rosenfield and Gordon Cole (David Lynch) speak about a particular woman being key to finding out if the long-haired Coop in North Dakota is their old friend, and in hindsight, Diane seems like the obvious answer. And it seems appropriate that Lynch would cast frequent collaborator Laura Dern in such a pivotal role. Diane will have an important role to play in the coming episodes according to Dern, and I can’t wait to find out what that is. Maybe she’ll bring the old Coop back.

After a slightly muddled hour last week, Twin Peaks has hit its stride again. The reveal of Diane was a goosebumps moment for me, and it’s good to see events in the town of Twin Peaks begin to have more impact on the overall story. Richard Horne is one of Lynch’s darkest creations, with echoes of Blue Velvet’s deranged Frank Booth, and I’m very eager to see what mayhem he causes next. There are theories that he’s the offspring of Audrey Horne and a BOB-possessed Cooper, which may explain his violent nature, but I’ll take that with a pinch of salt. We’re still lost in a sea of questions, but there are few shows as dark, frightening, and totally unpredictable as this on TV.

A focused, entertaining episode that gives the story some much-needed momentum.