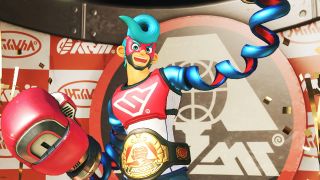 Nintendo's first new franchise for the Switch arrives next month in the form of Arms, a colorful fighting game starring a handful of cartoony characters equipped with a variety of strechy arm attachments. With Arms, it appears that Nintendo is hoping it can do for brawlers what Splatoon did for shooters, and provide an experience that caters to casual and hardcore players of all ages.

While our own hands-on (arms-on?) preview delves into whether or not its experiment is proving successful, Nintendo announced during a special Direct today that you can get a taste of its motion-controlled fighting for yourself in two Global Testpunch events, beginning May 26.

Players will be able to access Arms' multiplayer over two consecutive weekends. The first weekend begins Friday, May 26 (for North American players; global audiences will have access the next day) and runs through Sunday, May 28. The second weekend picks up the following Friday, June 2 (again, North American players get an early start) and ends Sunday, June 4.

Whether you're able to attend the Global Testpunch or not, Arms will release globally on Nintendo Switch on June 16, 2017.

And hey, if you're into Splatoon 2, we also got a tiny sneak-peek at the campaign, which looks like it'll include all kinds of new weapons, challenges, grind rails, and more stuff to splat.