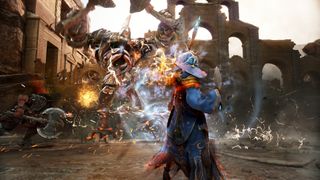 The Black Desert beta is now live on PlayStation 4.

While already available on PC and Xbox One, this is the first time the open-world action MMORPG has come to Sony's console system. The free-to-play beta is available now until the test ends on August 13, 2019, with an "enormous fireworks show for all players to enjoy".

While you won't need a PlayStation Plus account to access it, you will need a valid subscription if you want to participate in multiplayer activities.

The beta gives you the chance to sample three regions – Serendia, Balenos, and Calpheon – and you can rank all the way up to a max level of 50 with your own, highly customisable character. Playing the beta will also award you with "an exclusive Sky Hawk pet" when Black Desert formally launches on PS4 later this month.

There'll also be a chance for players to win a host of prizes over the beta period, including prizes for the top decorated residence, fishing skills, horse taming, cart racing, and even hide-and-seek with Pearl Abyss GMs.

If you've not come across it before, Black Desert is listed in our rundown of the best MMORPGs to play right now. It not not only offers standard levelling and questing, but also the opportunity to become medieval property landlords and even taking wholesale control of entire cities.

Running out of space on your PlayStation 4? Here's our rundown of the best PS4 external hard drives available now.