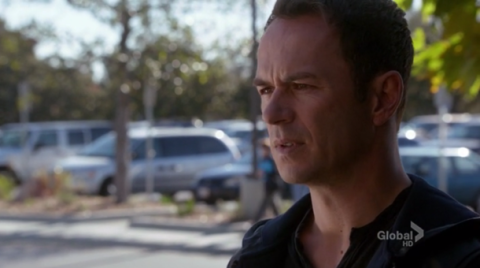 THE ONE WHERE One of the seven patients at the sleep institute dies, prompting Martin to investigate – with Trevor going undercover as a patient himself. Calvin, meanwhile, has realised he might be a good guy rather than a bad guy after all, and steps in to help. Things seem to be going well until Jake and Amelia are kidnapped in a final cliffhanger...

VERDICT “Fight Or Flight” is a lot better than last week's rather limp episode, and about time too, as it's the penultimate story in this season (and most probably the series as well). Unusually, Kiefer Sutherland steps down as the show's lead for most of the plot, leaving the majority of the story hanging on the shoulders of Greg Ellis as Trevor. He does a great job, too, revelling in the chance to do something that isn't either babysitting Jake or providing exposition from in front of a computer screen at Breakwire.

The sleep clinic storyline is wrapped up by episode's end, with the whole enterprise exposed as a con despite the fact that there's no proof to bring down anyone at Aster Corps (boo!). While their methods were certainly questionable, apparently the researchers were only 10 numbers away from the end of the Amelia Sequence – we bet they all went home that night, screamed, shouted and kicked their dogs. Oh well, thanks to the smash-and-grab at the end of the episode, at least they have Jake and Amelia to finish things off. Amelia's psychic dream premonition implies that the kids will be hooked up to machines and producing numbers in the big finale. Funnily enough, while it's taken two entire seasons for this to happen to both of them at the same time, it feels very much as though we've seen it all before...

Whatever happens with Jake, Martin and Amelia next week, anyone hoping that Aster Corps will get their comeuppance can take heart at the news that the company looks set to fold with a $40 billion loss. It's a little convenient, however, isn't it? Wouldn't it have felt more satisfying if Martin had ended the series by single-handedly bringing the company to its knees? Perhaps he will yet – we'll find out in a few days...

Hilariously, you can hear Frances Fisher as Nicole Farington audibly gulp when Calvin asks her how bad the company's finances are. Nice touch.

NUMBERS GAME This week Jake uses popcorn to tip Trevor off that he'll need to find locker 53 later in the episode. Although he has seen a little evidence over the course of the year that Jake has powers, Trevor accepts this particular incident without a word of surprise. Guess that's what happens when you hang out with Martin Bohm and his sprog.

SOLITARY CONFINEMENT We don't have any answers yet as to why Avram has been locked in a cell, but the fact he talks to himself while he's in there is very endearing. “I am afraid I do not understand the meaning of this,” he rather indignantly tells nobody at all when he reads a message sent from his captors. Bless.

NOT SO SNEAKY Kudos to Trevor for volunteering to infiltrate the sleep centre, passing a test (with a little help) once he's in there, and for tricking his nurse into thinking he'd swallowed sleeping pills. A slap on the hand, however, for sneaking out of his room and then standing in full view in a corridor to call Martin. Stealth FAIL!

TEMPORARY AMNESIA? Everybody appears to have forgotten that Martin was arrested for Lucy's murder last week, even Detective Lange. While he does make a reference to the fact that whenever he sees Martin, someone has died, he still trusts him way too easily for a suspected murderer.

BOUNCY CHAIR Avram seems like a rather old-fashioned chap to us, and yet his apartment contains this fabulous bouncy ball chair. Are they all the rage among Hasidic Jews? Either way, we want one!