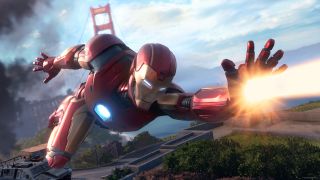 Marvel's Avengers has been a long time coming. Originally announced as The Avengers Project back in 2017 as part of a new, multi-game collaboration between Marvel Entertainment and Square Enix, the game finally got its moment in the spotlight at E3 earlier this year.

So far, the reception to Crystal Dynamic's blockbuster action adventure can be best described as cautious optimism, with concerns of awkwardly rendered character models and a Destiny-style live service gradually outweighed by the promise of a true superhero power fantasy; one which lets you play as Iron Man, Thor, Hulk, Black Widow, Ms. Marvel, or Captain America (at least until he's unexpectedly killed off in the game's prologue, anyway).

At a recent event hosted by Virgin Media in London, we got to go hands-on with Marvel's Avengers and chat with the game's creative director Shaun Escayg, who joined Crystal Dynamics after a lengthy stint at Naughty Dog, working on the likes of Uncharted: The Lost Legacy and The Last of Us. Escayg's background speaks to Crystal Dynamics desire to tell a meaningful superhero story, which he's keen to emphasise in our conversation, but we also touched on everything surrounding the game's future, from Google Stadia to the idea of a Marvel gaming universe itself.

Read on below for our full Marvel's Avengers interview with creative director Shaun Escayg.

GamesRadar: Google Stadia is now out in the wild. You've already announced that Marvel's Avengers is coming to the platform. How is your ability to play anywhere on this kind of game going to affect the way people play?

Escayg: What the various platforms allow is getting the game into everyone's hands to experience it. So, I don't foresee any other more legwork to get it running from our end. Our is team amazing at doing that, so there's no version of Marvel's Avengers that will go out in any significantly different way.

You've announced five playable heroes so far. Has it been difficult to capture the essence of each one and as a playable protagonist, to make sure gameplay translates into something which matches who they are as characters?

Escayg: That's been the challenge for the entire studio, right? How do we keep Captain America strong, fierce, and make his shield feel powerful? How do we keep Black Widow strong as a character who doesn't have superpower ability, all while existing in the same space as the Hulk or Iron Man? So it's been a real challenge, and that's what I'm really excited for players to actually feel the results, which are pretty amazing. It's something that we have definitely been trying to push and perfect.

This game started life years before any of us had seen Infinity War or Endgame. Has Marvel's recent cinematic output had any sort of influence or inspiration on the team's works as you've been going through development?

Escayg: I wouldn't say I have any specific moment that I've drawn from. I will say that I'm always inspired by Marvel movies. I think they're amazing. I would say most of our references came from the comics, just like the movies. We kind of drew into that 80 year history with Marvel, and really dug deep and they've been great collaborators and showing us iconic moments that they thought were awesome. But it's a balancing act and, of course, influenced by many different sources, depending on what the story dictates.

Did you expect the kind of reactions you got from the E3 2019 reveal in terms of people being freaked out by the character models - the fact that it wasn't Chris Evans' face on Captain America's body, for example?

Escayg: Sure. I mean, we knew we had that challenge, right? We're going up against a 10-year history of movies. And you know, people forget really quickly, but when the first movie came out, they had the same problem. People were upset with the way these heroes looked. So we knew going in that we would always have that struggle. But the focus for us was more on our original storyline, and how do we make sure that we stay true to that DNA of the characters in the comics and bring this story to life.

Marvel movies have been the headlines recently because of you know, certain comments by certain directors. I'm interested in what your take is on this re-examination of the genre...

Escayg: I think that there's a story in anything, including superhero stories where you can you can go under the surface. In Avengers, we certainly tried to dig deep. And the more we continue to dig deep as directors and writers to try to find that true emotions and struggles in these heroes, I think those type of comments will go away. There's a certain expectation of superhero movies that just hasn't been fully challenged yet.

You worked at Naughty Dog for several years, it must be quite surreal to be releasing within three weeks of a sequel to you were so closely involved in. What's that feeling like for you?

Escayg: I love The Last of Us. I worked really closely and really hard with it. So to see The Last of Us 2 finally come out?... I'm excited about it. You know, I'm just curious to see what they do as someone on the outside. I have no idea what it's like, and that's in some ways refreshing. I can go in and just experience it as a player.

Avengers is also launching in the same year as two next-gen consoles. Is that something that you've had to account for in your development pipelines?

Escayg: No, not particularly, I think we're always on the pulse of new technology, constantly thinking about how the game evolves on that technology. So the team is working hard at the best projections that they can make, ensuring that the games live up to the new technology and exploit them.

Ever since you revealed Avengers there's been a lot of speculation as to whether this is the start of a shared Marvel gaming universe, and whether it's connected to Insomniac's Spider Man game. What's your definitive comment on those rumours?

Escayg: This is an original Avengers story. It lives in its own universe, its got its own cast of characters that are pertinent to this particular arc that we're trying to push... The future has endless possibilities, but that's this game and that's the focus.

Is that kind of collaboration, hypothetically speaking, something that you'd be interested in?

Marvel's Avengers may look simple, but there's a deep RPG beneath that gorgeous exterior

What it is that makes Avengers a quintessentially Marvel game? Something that you have to nail to make sure it lives up to the source material?

Escayg: For me, it's levity in the midst of despair; that balancing act that Marvel does really well. There's always this sense of hope, and if you can maintain it enough that it doesn't feel like blind hope, but an opportunity to change fate. And I think that's what Ms. Marvel really brings to the story. She always sees the world through that lens, even though sometimes she has her doubts, her inner hope always prevails.

With that in mind, it can't have been an easy thing to decide to kill off Captain America. How did you manage to get that approved with Marvel?

Escayg: Marvel is really good if you can debate and convince them through story that it is a necessary evil that we have to have. You couldn't just kill Captain America; you have to explain why you need the Avengers to be without their leader, and show that that would be the breakdown of the very core of that team. If you remove that linchpin, what happens? He is so integral to the success of The Avengers, that removing that element that makes them the most vulnerable.

How much of Avengers have we really seen? How many secrets are your keeping close to your chest?

Escayg: There's a lot you haven't seen. And there's a lot more to be revealed. The story is way more nuanced than people realise, and I'm excited to see how players evolve with the characters as they reassemble, and really feeling the conflicts that they face and feeling those conflicts and having those also as players feeling that conflict, right. That's the most exciting part of this journey.

For more, check out the biggest new games of 2019 and beyond still on the way, or watch below for our hands-on impressions of Marvel's Avengers.