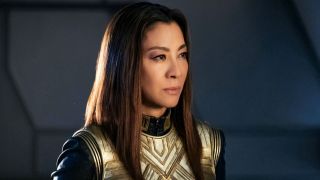 While many may have been glued to their seats watching the Super Bowl (and its myriad trailers), there was a hearty few braving the farthest reaches of outer space for their fix of twisty-turny Terran fun. No, I’m not talking about the response to The Cloverfield Paradox. It is, of course, the penultimate episode of Star Trek Discovery’s first season, and it still managed to impress without entering warp speed.

Spoilers for Star Trek Discovery within.

Ash is back. I think?

Look, I think this one is going to run and run. Michael feels that way too. She’s indecisive and can’t decide if her beau is all-the-way Klingon or plain ol’ Ash Tyler. For now, though, she’s made the heart-rending decision to separate herself from everybody’s favourite (possible) double agent.

I wanted to hit something with this episode of Discovery. So forgiving of Tyler but Burnham is shouldering the responsibility of the entire war? If I was her, I would run back to the penal colony. #StarTrekDiscovery #OnFleet5 February 2018

Tilly is the real MVP

One of the episode’s best low-key moments came when Tilly (who has been criminally underused in recent weeks) plucked up the courage to go and sit next to an ostracised Ash in the mess hall. Among all of the fights, phasers and fanatical Klingons, it’s still the tiny character moments that matter most.

#StarTrekDiscovery I love watching Saru walk, and I freakin' love Tilly so much!!!5 February 2018

Tilly is the best of Starfleet. #StarTrekDiscovery5 February 2018

Awwww, that scene in the mess hall had ALL the feels. @startrekcbs #StarTrekDiscovery5 February 2018

L’Rell and Admiral Cornwell’s interaction this week may have been highly-charged (I’m sensing more great scenes in their future) but it’s also spawned the show’s OTP. Move over, Stulbert and Vurnham, CornRell is in town.

Sure, the Eagles overcoming the Patriots had its moments of high drama. But it didn’t have nearly 16 weeks of fantastic action before setting up a mouth-watering finale. Ok, ok maybe it did have that. But, still, Discovery is fast becoming a must-not-miss show. Ready for next week's finale?

Because we Canadians get #StarTrekDiscovery 30 minutes before everybody else, lemme tell ya this. This show rewards you for skipping the Super Bowl. #OnFleet pic.twitter.com/al8rlpIExt5 February 2018

If you're a Star Trek fan that never gave @startrekcbs a fair shot or gave up after a couple of episodes, you're missing out big time because it's become utterly fantastic. #StarTrekDiscovery5 February 2018

Boy, #StarTrekDiscovery knows how to end an episode on a bang! #onfleet5 February 2018