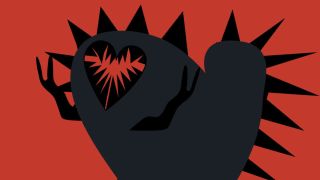 We all handle breakups a bit differently. Some of us move on quickly, and are right back on our feet as independent people. Others can fall into bad habits or unhealthy thoughts and behaviors. Like making a voodoo doll with an ex's picture, maybe. Still others channel their emotions into art, creating something new out of something broken. That's what indie developer Tim Ruswick did with his PC game Philophobia: The Fear of Love, and now he hopes it'll help others the way it helped him.

Ruswick, who also runs a YouTube channel aimed at helping aspiring developers called Game Dev Underground, posted a clip of Philophobia gameplay to Reddit on Valentine's Day. He didn’t expect it to garner much attention. It was, after all, a mostly personal project created to help him deal with what he called a "really rough" breakup. You can see the game in action below:

"At first this game was super dark and brutal. It was a representation of my dark feelings, crazy depression, extreme anger. It was nearly impossible, with a dark and evil ending. This game has kind of helped me work through that (it's based on the 5 stages of grief)," Ruswick wrote. "I made each boss represent an emotion that I felt, and I think I'm finally at a point where the ending is something fitting."

Ruswick said that he'd planned to release Philophobia on Valentine's Day (appropriate, given the subject matter and how the holiday can be stressful and upsetting for many), but the game simply wasn't ready. "Since I think people in a similar situation will be playing it, I feel like I have an obligation to give them the best experience possible to help with those emotions."

But even in its unfinished state, Philophobia is already having an impact. Ruswick's post was upvoted to the front page of Reddit, and currently has more than 600 comments, many from people sharing their own stories of love and loss. Some are still bitter, some look back in mild bemusement, others are offering advice. Whether it's good or bad advice is up for debate, but the fact discussions are happening is, I think, inspiring.

Ruswick's creation is a reminder that games don't need multimillion dollar budgets or massive marketing campaigns to be worthwhile. They don't need 4K graphics or infinitely replayable multiplayer. Don't get me wrong, I'm glad those types of games exist - but I'm also glad that a simple platformer game about going through pain, interwoven with love and regret, is giving people a bit of catharsis. Sometimes you just need something that comes from the heart.