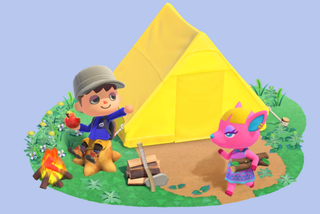 Christmas just came a little early for Animal Crossing fans courtesy of a delicious pile of new images, including some that show off the wide customisation options coming to Animal Crossing: New Horizons.

In amongst the images of trees and fruit shared by GameXplain (thanks, ResetEra), there are also a number of shots that illustrate just how freely players will be able to customise the physical appearance of their avatars in the new Animal Crossing game.

As well as a number of different skin shades, there are also many noses, mouths, hairstyles and colours, plus what looks like a diverse range of snazzy outfits, too. Here: you can take a peek at the video below, as well as check out a full image gallery on the Nintendo wiki:

Nintendo has confirmed that the Animal Crossing Switch release date is set for March 20, 2020. That's quite the change from that 2019 original pencilling, but it looks like it's going to be worth the wait!

While this latest batch of images don't give away much in terms of gameplay, as Jordan revealed at the time, the latest gameplay footage confirms that despite some new additions to the formula - like crafting and social aspects - the heart of Animal Crossing: New Horizons will remain familiar with the series, which means we'll all be fishing, catching bugs, and growing flowers in perfect harmony, rain or shine.

Here are 11 games like Animal Crossing to stroll through until New Horizons releases.