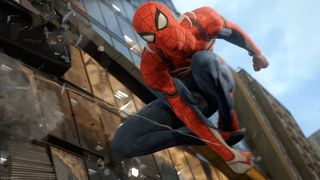 One of of the many reveals in Sony's powerhouse (eyeball offensive) of an E3 conference was the small matter of a PS4 exclusive Spider-Man game from Ratchet & Clank devs Insomniac. While the glimpse of tantalising swinging gameplay was all we really got, Insomniac has been revealing some choice details about the web slinger's new adventure on Twitter.

First off, Spider-Man will be running on the Ratchet and Clank engine. A fan asked if this would be the case - well, they actually asked about Rachel and Clank - and Insomniac confirmed saying that it "iterates" the engine between games but it doesn't have more than one. In an earlier Tweet, it confirmed it directly saying it would run on the Insomniac Engine.

@EtheralGamer Heh, Rachel. We always iterate our engine between games. We don't have more than one though.June 27, 2016

Also confirmed is the fact that this will be an open world Manhattan. Given my possibly unhealthy obsession with PS2's Spider-Man 2, this makes me very happy indeed. Insomniac are working closely with Marvel on the story, which, importantly, is not an origin this time - Spider-Man has been hurtling around the skyline for a good while and knows what he's capable of. Insomniac's also saying that it can't get into too many details but in interviews, the team is mentioning Peter's importance. This might mean we'll be switching between the two instead of constantly staying in the suit.

@thismmafan keep in mind this is NOT an origin story, it's very much a more experienced Spider-Man22 June 2016

The team working on the game is apparently "huge" and those impressive swinging shots in the reveal were actual gameplay. And yes, in case you're wondering, everything is running on the current gen PS4, not a mystical future box.

@iHuGi in game/engine/real-time. Running on current PS4 hardware, not the high-end PS419 June 2016

And finally, when it comes to the suit, that white Spider symbol is apparently important but Insomniac is helpfully not explaining what that might be. Thanks guys. I'll keep my Spidey senses on to keep you updated.