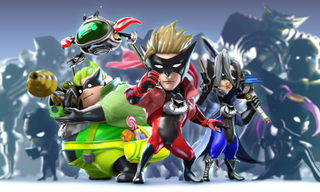 Update: The Wonderful 101 Remastered Kickstarter continues to impress, as it has now sailed past its funding target for a Steam version and PS4 version, with over 15,427 backers, sorry, now 15,429 backers at the time of writing.

New stretch goals have been added for a Time Attack mode (unlocked when funding reaches a cool $1 million, which it's looking very likely to) and Luka's First Mission, which the campaign describes as a "brand new 2D side scrolling mission starring a new hero". For that to be added, funding will need to hit $1.5 million.

It understandably means a lot to the devs at Platinum, who posted this celebratory tweet below.

Wow! Tremendous thanks to the over 13,000 Kickstarter backers who've pledged over 100 million yen to The Wonderful 101: Remastered! Watch us celebrate the moment. #ALLFOR101 #Platinum4 pic.twitter.com/CBIpjm4mxHFebruary 4, 2020

Original: Platinum Games has launched a Kickstarter to ask fans to help fund The Wonderful 101 Remastered and nearly as soon as the campaign went live, it surpassed its initial goal of $50,010 from backers. At time of writing, over 2,000 people have contributed upwards of $140,000 and viewing the campaign page lets you watch the money spill over in real time.

We reported last week on Platinum’s efforts to tease a new project following leaks that suggested The Wonderful 101 was heading to Switch. As it turns out, the studio is seeking to bring the once-Wii U exclusive to multiple platforms. For now, the initial funding goal is intended for a remastered release of the game for Switch, but Platinum says it hopes to bring it to more platforms via stretch goals. It specifically mentions PS4 and Steam releases as stretch goal targets.

The Wonderful 101 originally launched on Wii U in 2013 to favorable reviews, even as our own was less impressed than the consensus. In what Platinum describes as a “Unite Action” game, players control a team of superheroes defending their comic book-inspired world from alien threats. It was directed by Hideki Kamiya, a former Capcom employee and the co-founder of PlatinumGames who has developed several popular games such as Resident Evil 2, Okami, Devil May Cry, and Bayonetta.

Backers will be eligible for a Special Backer Edition of the game which includes exclusive cover art. The studio added backers “will receive DLC unlocked via stretch goals for FREE!” The crowdfunding campaign concludes on March 6, and if you want to go for one of the higher tiers, you can also pay for Kamiya to block you on Twitter. We've seen worse tier rewards on Kickstarter.

If you’re a fan of Platinum, don’t miss the gameplay reveal for the studio’s latest IP, Babylon’s Fall.