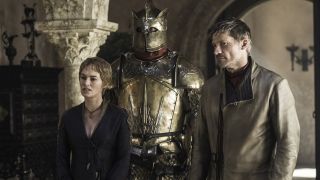 We all have our theories about Game of Thrones. They range from the sensible, like 'Ned Stark isn't Jon Snow's dad' and 'Sansa Stark is pregnant with Ramsay Bolton's child' all the way through to the insane: 'Benjen Stark is Daario Naharis' and 'It was all Hodor's dream'. However, none is quite as outlandish - yet deliciously enticing - as Cleganebowl. Odd name for a theory, right? Let me explain what it is, and why it could happen in Game of Thrones season 6. CAUTION: Spoilers ahead.

As you might have gathered from the name, this theory concerns the brothers Clegane: The Hound, who is left for dead by Arya (in the TV show), and The Mountain, who is preserved from death by non-Maester Qyburn to serve as Ser Robert Strong. You remember Gregor 'The Mountain' Clegane? He's the fella who crushed poor Prince Oberyn's head to pulp during Tyrion's trial by combat. At first glance it seems a total crackpot assertion that they'll somehow meet again - one is supposedly dead, the other is a zombie in Kingsguard armour. However, the Cleganebowl theory suggests they will not only meet, but fight to the death to determine the fate of Queen Regent Cersei. Wut?

Let's look at the facts first, then. The Mountain is still semi-alive, and is in the service of the Lannisters at King's Landing - crushing the skulls of their enemies. We also know that Cersei was told by a witch (when she was a child) that she'd have three children (yes), that all three would die before her (two out of three - doesn't look good for Tommen), and that she herself would be killed by someone referred to as “Valonquar”. In high Valyrian, 'Valonquar' means 'younger brother'. Throughout the show Cersei has strongly believed that the witch was referring to Tyrion, which is partly why she so firmly believes he killed Joffrey in season 4 and aims to have him executed. But that all seems too obvious for a show like Game of Thrones.

Now to the speculation, which fills in the blanks of the theory. The Hound was left for dead by Brienne / Arya, but we never see him die. In Game of Thrones that leaves the door open for a potential return, no matter how unlikely. Similarly, in the books, the Hound is merely left for dead (under different circumstances) but... and here it gets interesting... it's strongly hinted at in A Feast For Crows that he's alive. Brienne is scouring the land for any sign of Sansa or Arya and she visits the Quiet Isle - a retreat for religious members of The Faith. Here she speaks to the Elder Brother who admits that he found The Hound and tried to help him as he lay dying. When questioned he says that The Hound is 'at rest'.

While at the Quiet Isle, Brienne sees a very large man digging graves outside the monastery, who happens to have a burnt face. This has led many to speculate - very sensibly - that the Elder Brother returned Clegane to the monastery, healed him, and convinced him to disassociate the 'Hound' aspect of his character. In other words, to let go of the hate and anger that makes him 'The Hound'. So that could well explain what happened to Sandor Clegane after he was left for dead.

Nice theory, but there are still plenty of holes. What would possibly bring Sandor and Gregor together, and why would they end up fighting? And why is it called 'bowl'? That last one is easy - it's a reference to the 2013 Superbowl, here the coaches of the opposing teams were brothers - Jim and John Harbaugh. But what would bring The Hound to King's Landing? And why Cersei?

Ok. Cersei, despite being returned to the Red Keep, is still accused by the Sparrows of incest. We know from season 6 episode 3 that Cersei plans to have her fate decided in trial by combat. While speaking to Jaime and Qyburn she says the Mountain 'only has to beat one man' to defeat the High Sparrow, and only admits she plans to have a trial by combat. If this is the case, the Sparrows would have to choose a champion too. Given that they have links to the Quiet Isle, they could - quite easily - send word to the Elder Brother and ask for their fighter. Who would you choose? Yeah, Sandor Clegane. All of a sudden you have the brothers Clegane in an arena, fighting to the death. Cleganebowl!

What's to say the Sparrows would choose someone like Clegane as their champion? Well, there's one piece of recent evidence that lends even more credence to it all: Ian McShane. Speaking recently to BBC Breakfast, the Deadwood star gave some clues about his role in Game of Thrones season 6. Here's the direct quote for you:

“My character is an ex-warrior who’s become a peacenik. So I have this group of peaceful … it’s like a cult, peaceful tribe … who have brought back … I bring back this beloved character that everyone thinks is dead. So, I’ll leave it at that.”

An ex-warrior running a peaceful group? That sounds an awful lot like the Elder Brother. According to the books, he was a former Knight (with healing powers - eyebrow-raising intensifies) who fought at the Battle of the Trident, for House Targaryen. Knocked unconscious during the fight, he's left for dead - his armour stripped and his body dumped in the Trident. He wakes up naked on the Quiet Isle and forms his peaceful group.

Now, if this is the case - if McShane is indeed the Elder Brother - why else would he be in season 6 other than to bring back The Hound? McShane has already told us that he's bringing back a popular character - there are very few 'ambiguously dead' characters in the show (Stannis, Jon Snow, the Hound) so that certainly works in favour of the Cleganebowl theory. We've already had a foreshadowing of The Hound's return in season 6 episode 3, where Arya is questioned about what happened to him. She admits that she 'left him for dead' after she is struck for saying 'he's dead'. She also says that she crossed him off her list before leaving him for dead. Why would the Faceless Men of Braavos want to know about The Hound - who has nothing to do with any of the current plotlines - unless he's making a return?

So, that's the case for The Hound fighting the Mountain in King's Landing, which would likely happen at the climax of season 6. If the two are fighting Cersei's trial by combat, one of them has to win. What if it's The Hound, who is the younger of the Clegane boys? That would mean death for Cersei, if she is found guilty of incest. She would, indirectly, be killed by 'younger brother'. Or Valonquar in Valryian. Cleganebowl: it's so, so on!