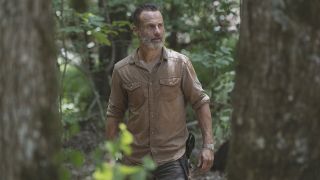 Regardless of how it turned out, What Comes After was always going to be the most significant episode of The Walking Dead season 9, and arguably the entire show to date. Few actors can claim to have lead a hit TV show for so long, and Andrew Lincoln’s performance as Rick Grimes has been exemplary throughout, regardless of the wildly inconsistent material he was often working with. That makes his departure a hard one to watch, but AMC has presented a moving, panegyric paean to both actor and character with What Comes After, which simultaneously cultivates a tasteful denouement that makes sense in the context of season 9’s overarching themes. Suffice to say, there are massive spoilers for The Walking Dead within the following review.

Now that the spoiler-averse have fled the scene, let’s dive right into that final scene on the bridge. After deliriously meandering back to camp, with a huge horde of zombies on his tail, Rick realises what he must do to protect Alexandria, The Kingdom, and everyone else, before saying his goodbyes and going out in true Sheriff Grimes style. For all of season 9 so far, the bridge connecting the communities together has been Rick’s baby, a giant metaphor of wood and concrete, symbolising his commitment to building Carl’s posthumous vision of a peaceful future.

5 question we have after Rick's exit from The Walking Dead

By sending both himself and his bridge tumbling into the river, saving everyone from a fatal herd invasion, Rick has become a martyr to his own monument, and his death will no doubt leave Daryl, Maggie, and Oceanside reconsidering their antagonistic behaviour in recent weeks, hopefully paving the way for more peaceful relations amongst the bickering communities. The path to a harmonious future for this new civilisation necessitated a sacrifice, it seems, and - in one of The Walking Dead’s most poetic moments - that sacrifice was voluntarily made by none other than Rick Grimes himself. I can’t think of a better send off for a hero whose entire character arc has been about the struggle to do the right thing amidst the collapse of humanity. His last act may have killed him, but the man has confidently left this show as a hero.

Of course, Rick’s not really dead. In a convenient deus ex machina, Anne has taken him as smuggled goods into the enigmatic community she’s been trying to flee to for the past few episodes. While Michonne, Daryl, and the rest are left mourning the apparent demise of their friend and leader (every cast member gave tear worthy performances channeling their raw response to losing Rick), Anne’s exfil out of Atlanta presents AMC with an opportunity to give its protagonist an open-ended send off, leaving the door ajar for a return if and when Andrew Lincoln decides he’s ready to wear the sheriff hat once again (and it very much sounds like he will be, this time for the big screen).

There’s a fitting circularity to The Walking Dead’s biggest Easter egg - that damned helicopter - being finally addressed by way of the character associated with it since season 1’s premiere, allowing What Comes After to stand out as a neat meta-commentary on the show’s rich lineage. All this time, the helicopter spotted in the background and skies of almost every season of The Walking Dead till now has been teasing Rick’s exit. Regardless of whether AMC had been using this as intentional foreshadowing from the very beginning or not, it’s still a great bit of televisual storytelling.

Indeed, What Comes After is not just a eulogy to Rick Grimes, but a fan servicing retrospective on the show’s eight year history. Cameos from Jon Berthnal’s Shane, Sonequa Martin-Green’s Sasha, and the late Scott Wilson’s Hershel (appearing as ghostly augurs across Rick’s spate of homeward delusions) are genuinely touching surprises, despite having been leaked and subsequently revealed weeks before, while Rick’s hallucination amongst a pile of dead bodies authentically recreates an iconic moment from the comics that readers of Kirkman’s source material will appreciate and admire.

Flashbacks to Rick’s past, right back to season 1 (hello again, “Don’t Dead Open Inside”), are effectively deployed and integrated with the present timeline to layer up the emotional weight of his departure, emphasising how much of a watershed moment this is for The Walking Dead at large. It’s a stark reminder that, throughout every season and all their respective ups and downs, there’s always been Rick Grimes, and his egression will change the very essence of the show forever.

Outside of the Rick retirement, What Comes After featured a small handful of scenes designed to set up the post-Grimes landscape for season 9. We can’t be mourning this character forever, after all, and let’s not forget that there’s still 11 episodes of this season still to go. At Alexandria, Maggie’s jailhouse visit to Negan is interrupted by Michonne, before the latter lets her through following an impassioned argument, at which point Maggie finally realises that living is a punishment worse than death for the Saviour villain, and her bloodlust for revenge finally dissipates.

It’ll be intriguing to see how the big baddie is affected by the Rick news, and how it’ll play into his character arc from the rest of season 9 onwards. We know Negan’s not going to be in that prison cell forever, but what kind of person will he be once he makes it out? This, alongside the introduction of The Whisperers, Maggie’s impending leave, and the newly established time jump are the remaining story threads that hold the most purchase in season 9 from here on out.

That’s right, The Walking Dead season 9 seems to be teasing yet another hop to the future, this time by several years, as we end on the scene of a much older Judith Grimes fighting off the dead brandishing her father’s signature hat and gun. It was a great way to tie off a special episode, but you do wonder where AMC is going with this. Season 9 already had a great narrative backdrop established with its uneasy post-war detente, and I fear a shift to a whole new cast of characters and stories might feel jarring, especially coming straight after this homage to seasons past.

Perhaps I just wonder whether The Walking Dead will be able to maintain its winning streak now that its key character has left, as history provides all too many examples of shows that fell apart as soon as their biggest stars jumped ship, but I suppose the rest of season 9 will be a litmus test in that regard. More than anything, Rick’s purging is an opportunity for AMC to let go of tradition and chart a new path for The Walking Dead, as it discovers how to fill the void left by Andrew Lincoln’s immensely talented boots. Change is sometimes hard, often devastating, but usually, after time, we learn that it’s ultimately for the better. In that sense, Rick Grimes’ final episode is no easy viewing material for longtime fans, but I have faith that this is exactly the kind of emotive shakeup that The Walking Dead has long been in need of.

Verdict: A thoughtful, commemorative tribute to both Rick Grimes and the show he’s been frontrunning since 2010, What Comes After is worth watching even if you gave up on The Walking Dead years ago.