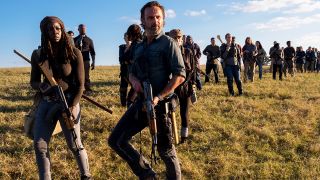 The Walking Dead season 8 ending firmly drew the curtains on Rick's bloody war with Negan, with the latter now imprisoned and the Saviours brought in as uneasy allies among the remaining communities of Hilltop, Alexandria, and The Kingdom. The Walking Dead season 9, which starts this week, will show exactly how that all plays out, but we're still left with plenty of questions before the premiere airs on October 7.

1. How will The Commonwealth feature in season 9?

Remember Georgie and her “Key to the Future” trade with Hillltop in episode 12? It’s almost certain that her character is AMC’s way of teasing a future encouter with The Commonwealth, a key community from the comics that will likely be appearing in the TV show in one form or another during season 9. However, seeing as The Walking Dead doesn’t always follow the same narrative beats as its source material, there remain a number of questions pertaining to the nature and identity of The Commonwealth, and what kind of presence it’ll have in the show.

Is Georgie meant to be an interpretation of Pamela Milton, the civilisation's leader from the comic books? Will they be a friend or foe to Rick, Maggie, and Ezekiel? And do they have anything to do with that blasted helicopter which pops up every now and again this season? Sadly, like the mysterious hovercraft itself, any official information surrounding The Commonwealth is all up in the air for now.

2. Will we ever see old man Rick again?

In hindsight, season 8’s very first trailer, which appeared to tease a massive time jump for the show to a period of tranquility for an older, beardier Rick, was a really naughty move by AMC. Like Glenn’s fake death in season 6, the whole thing turned out to be one giant rug pull, as the scene was nothing more than a pipe dream for Carl and Rick, the former of whom is now dead, despite showing up in the vision itself, thus confirming its fabricated nature.

But Andrew Lincoln is leaving the show for good this year, so how will Rick leave The Walking Dead season 9 if he's not going to grow old and wise as this scene suggests? In any case, it looks like we won't be seeing any more Old Man Rick in the future, though season 9's 18 month time jump certainly puts the sheriff well into his middle ages, with a rugged grey beard to boot.

3. Can Negan find a way out of his prison cell?

“I’ll get out of it. I always do,” boasts Negan during the finale, shortly before being sliced in the throat by Rick and subjected to lifelong imprisonment for war crimes. I’m not so sure you’ll be getting out of this one Negan, although... as any reader of the comics will know, Negan’s incarceration has historically never lasted for long. In fact, he eventually becomes one of the good guys in Kirkman’s graphic novels, helping Rick out and working to build the community together, before eventually leaving Alexandria altogether to find another civilisation to save.

That turnaround for such a despicable character could make for some intriguing viewing, but the show’s capacity to break away from the comics means this isn’t a guaranteed story arc for season 9. In short, while it’s clear that Negan isn’t much of a threat right now, I doubt he’ll be singing Kumbaya round the campfire with Rick anytime soon.

4. What will become of Morgan?

We sort of know the answer to this question, as the troubled character has literally just shown up in Fear the Walking Dead’s season 4 premiere, which neatly aired straight after The Walking Dead finale. Following a period of wandering to gather his thoughts and restore his moral compass, Morgan bumps into the Clarks, and his tormented soul has already been a conversation starter for several characters from the spin-off.

But will he ever be returning to The Walking Dead itself? And could he bring some Fear the Walking Dead characters back with him? Nothing’s off the table, though if Morgan does make the trip back to Alexandria, he needs to be in a healthy state of mind. We’ve seen enough of Lennie James playing the crazy guy, thank you very much.

5. Can the Saviours get along with their new leader?

With Negan incapacitated, and his rule of terror dissipated, many of the surviving Saviours are now seemingly living at peace in their new circumstances. We got a glimpse of former antagonists like Laura getting along just fine with her changed surroundings, but surely there’s still seeds of animosity between these former enemies?

They were killing each other’s friends and family only days ago, after all, so are we really to believe that Rick’s little pep talk was enough to heal all those open wounds? Nah, sorry, but I don’t buy it. Season 9 needs to show that there’s still plenty of tension amongst the Saviours and Rick’s gang, otherwise this entire war might as well have been isolated to a single episode.

6. Is love in the air for Maggie and Aiden?

Aside from the obvious couple in the making, Carol and Ezekiel, season 8’s finale suggested that more romance could be in store for a key Walking Dead character in the future. Yes, it looks like Maggie might actually fall for Aiden, a man who was once working for the guy who brutalised her husband with a baseball bat. As love stories go, it’s a little messed up, but hey, when you’re in the apocalypse, you gotta take any chances for love that you can get.

I could be wrong, of course, and their earnest conversations were nothing more than a outward expression of mutual respect, but we all saw Aiden’s gaze following Maggie after she finally accepted him into Hilltop, right? As far as I’m concerned, this show could always use more romance, so you count me in on board the Maggie-Aiden shipping train.

7. Will Dwight ever return?

Things are starting to look up for poor Dwighty boy, as Negan likes to call him. After confessing his crime and apologising profusely to Daryl, he was set free to find his wife and being to “make things right.” He even found a lead on Sherry’s location, upon finding a note addressed to him with the word “honeymoon” enclosed. Here’s the thing though; where exactly did they go on honeymoon?

If it was anywhere outside the country, then I’m pretty sure Dwight’s never coming back, but perhaps the newly wedded couple just made a nearby excursion to a local spa, which would maintain the possibility of a future appearance for the pair in season 9. Thing is, Daryl did threaten to kill Dwight should he ever show his face at Hilltop again, and I kind of believe him. So if this is Dwight’s definitive exit, it’s nice to see a character depart the show without being killed off in some horrible fashion, even if that honour went to a redeemed antagonist rather than one of the really good guys.

8. Is an Alexandria/Hilltop civil war on the horizon?

Ugh. I’m too angry to hide my utter distaste at AMC’s decision to even consider what it appears to be teasing for Maggie in season 8. After Daryl and Rick had duked it out in episode 5, I really thought we had put this whole ‘tensions amongst the group’ thing behind us, but no, right near the end of the episode, we were treated to a horribly unearned scene in which Maggie, Daryl, and Jesus(?!) began to conspire against Rick and Michonne, as if their entire history of friendship and shared experiences means nothing to any of them.

Not only does this feel out of character for everyone involved, Jesus and Maggie especially, but it just comes across as AMC scraping the bottom of the barrel in a desperate attempt to add new dimensions to a floundering show. The very idea of Maggie as season 9’s antagonist would be a betrayal of everything that character has meant to the audience over the last eight years, and I hope AMC take a hard U-turn on this decision before it’s too late.