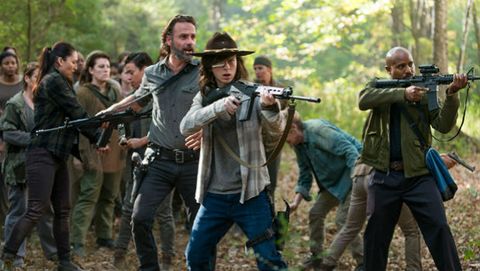 Rick gets one step closer to victory - and villainy - as he raids Oceanside.

Something They Need is a frustrating reminder of how incredible this season of The Walking Dead could’ve been if it had been handled more deftly. It takes ideas from across the entire season to their logical, inevitable conclusions, but does so in such a ham-fisted way that all you can do is sigh and wish for what things had gone differently. It’s not that this episode was bad, it was just Morality for Dummies - an unsophisticated look at the thin line between hero and villain.

Rick and his allies need guns for their assault on the Saviors, so Tara finally gives up the intel that Oceanside exists and has a well-stocked armory. She feels bad for going back on her promise to Cyndie but, hey, this fight needs to happen and the Oceansiders can just join them, after all. It’s for the greater good! With a few well-placed (and harmless) explosives creating a distraction, the good guys are able to round up everyone in the community and hold them at gunpoint while they attempt to persuade them to just hand over the guns. A bunch of walkers, drawn by the noise of the explosions, interrupt negotiations and the living bond over forming a line and taking out the dead. Some of the Oceansiders do indeed want to join in the fight, but they all end up staying behind… in the camp that Rick and his friends have now left utterly defenseless. Let’s pause for a moment to remember why Alexandria doesn’t have any guns of its own - because the Saviors rolled up and took them. But the Saviors are the bad guys… OR ARE THEY?

This is what I mean when I’m saying that the moral implications of Rick’s actions are being handled in a remarkably unsubtle way. Throughout the entire season, we’ve seen how one decision leads to the next, each choice making sense, until suddenly you wind up as someone doing things you don’t recognize. Dwight is the perfect example of this, as he started out a decent guy just trying to survive and ended up a cruel soldier in Negan’s army. He didn’t leap from ordinary guy with a bad memory straight to dude who led an innocent man to be thrown headfirst into a furnace - he got there step by step, just as Rick is now doing.

Meanwhile, Negan stops one of his people from raping the captive Sasha by plunging a knife through his neck. He leaves Sasha the knife and the corpse, allowing her the option of taking herself out, letting the rapist do it when he reanimates, or choosing instead to survive and join Negan’s team. He admires her a great deal and thinks she could add to their collective… but he also recognizes that she’d be super helpful in fighting the Alexandrians. As Sasha ponders her next move, Eugene comes to visit and provides the episode with its one brief moment of authenticity. He wanted to be brave, he explains, and he believed that he could be, but after watching Abraham - a true survivor - die, he realized how wrong he was. Negan will keep him safe, and more importantly, he’ll never be put in a position where he has to try and be brave again. He wants Sasha to understand, but she doesn’t, and he leaves, dejected.

It’s a fairly simple moment, but one that also reveals a core part of Negan’s appeal: he understands that not everyone is a fighter. Rick expects everyone to pick up a gun, a knife, a sharp stick, but not everyone is cut out to do that. Negan allows people to feel safe and useful while also not putting themselves in mortal danger; he doesn’t call them cowards or sneer at them, he puts them to work running a pharmacy or making pickles. Which camp was kinder to Eugene, the ‘good guys’ or the ‘bad guys’?

Sasha agrees to join the Saviors, but it’s really just a ploy to try to get close enough to Negan to finish him off. She lies to Eugene, saying she doesn’t want to give Negan the opportunity to use her against Rick and the others, and begs him to give her a weapon so she can end her life. He thinks about it, and because he genuinely cares about her and respects her, slips her one of the poison pills he’d made for Negan’s wives. Not quite what she was going for, but maybe it’ll come in handy later - just keep in mind, the dose was too small to kill someone Negan’s size.

Over at Hilltop, something interesting is going on with Gregory. He sees Maggie out teaching folks how to grow things and just generally being a strong leader, and follows her outside the walls to talk to her a bit. Gregory never goes outside the walls, so even being that far away from his desk is kind of a big deal, but then he even tries to kill a walker all by himself! He doesn’t, of course, because he’s never done it before and it’s a fairly terrifying thing to attempt, but he does try. Maggie takes out the undead with a gardening trowel, and is very kind to Gregory as he pukes all over his shoes; more kind than the Hilltop residents who have a quick laugh at his expense. Gregory is acutely aware that Maggie is a better leader than he is and that his position in Hilltop is at risk, and he even thinks about killing her when her back is turned. So the question is, will he swallow his pride and work with her to make the community better, or will he continue to be a craven jackhole and find a way to get rid of her? Human nature being what it is, probably the latter, but hey, maybe he’ll surprise everyone.

And thus our stage is set for the season finale next week. Rick has his guns and his army. The Saviors know he’s coming. Dwight has defected because he wants Negan dead. Eugene’s cleverness is at Negan’s disposal. Sounds like the two sides are pretty evenly matched, so the final showdown should be quite interesting.

Rick gets one step closer to victory - and villainy - as he raids Oceanside.