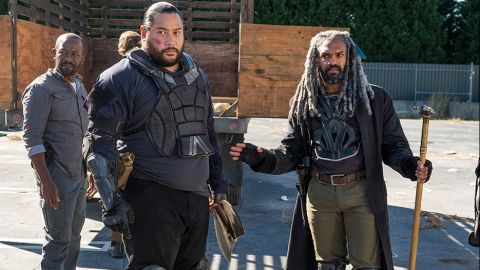 After last week’s The Walking Dead was derailed by the least-convincing CGI deer in recent TV history, this week’s show confronted reality in an entirely more plausible way – by examining how hard it is to retain your grip on it, when living in such bleak circumstances. Short on walkers, shorn of CGI distractions, ‘Bury Me Here’ was as close as the The Walking Dead has been to its best since the dizzying turmoil of season 4 – in itself, an indictment of how far the show has lost its way. Like so many of its characters, the show has been in denial about its true calling, but ‘Bury Me Here’ reminded us of why it can be so gripping, by investigating what it is to be human and how we move forward from profound personal loss.

The short answer is: we don’t. We cope. This episode forced several characters to confront tough questions they’ve been running from. Will Ezekiel abandon the Kingdom’s illusion of safety to fight the Saviors? How will Richard provoke Ezekiel into making that decision? Will Morgan repent on his vow to protect life in all its forms? How long can Carol remain in exile without taking a stand? The episode’s success was how it interwove those decisions, as characters provoked the point-of-no-return in others, but not always in expected ways.

The plot revolves around a supply drop from the Kingdom to the Saviors, which quickly goes wrong when it turns out that one melon is missing… much to Ezekiel’s surprise. In a clearly-signposted, but deftly-handled, twist it turns out that Richard sabotaged the supply drop himself. He hid one of the melons in the abandoned city outside the Kingdom, knowing full well it would provoke the Saviors into violence and push Ezekiel toward war. Richard hoped he’d be the one to die – “It was supposed to be me… That was what Gavin (the lead Savior) said. That I’d be first.” he later tries to explain – but, of course, things don’t turn out as planned.

It isn’t Richard who gets shot, but Benjamin, whose naivety and optimism are the two character traits that almost always mark you for death in this show. Benjamin gets shot in the leg by – surprise – the comically hateful long-haired Savior who previously stole Morgan’s staff. The Kingdom crew make a desperate dash to stop Benjamin bleeding out, gatecrashing Carol’s house for help, but to no avail. It’s the flashpoint that causes Richard to spiral into guilt and despair, plus triggers something more profound in Morgan, which isn’t explicit until later in the episode. It’s testament to actor Lennie James presence that his character is often at his most expressive during contemplative silence. Throughout the episode, it’s often Morgan’s steely glare and simmering rumination, that force those around him into confessing their past. He’s a mirror of silence, imploring those who face him to confront themselves.

Back in safety of the Kingdom, Richard confesses his botched plan to Morgan, whose rage is rattling behind his eyes like a boiling saucepan, opening up about how he lost his wife… and later his daughter… since he failed to take charge of their desperate situation.

“I was in a camp when it started.

It was huge, endless, a city of – of tarps and latrines and wood smoke and babies crying.

There were always babies crying.

I knew they had problems, but I didn't think they were mine to solve.

I thought there were stronger or smarter people there than me.

[Voice breaking] W-Who the hell am I, right? So I did nothing.”

Richard’s tragic confession provides welcome context for his desperation to provoke Ezekiel into conflict with the Saviors, but clearly doesn’t earn Morgan’s forgiveness – more on that later. His words tap into the heart of the show’s underlying tension, in that *nobody* wanted and expected to live in the world they find themselves today – or to have to deal with such incalculable loss – but that a failure to accept this reality is certain death. It’s how the once-meek, abused, perfect housewife Carol is now the show’s most cold-blooded killer… and struggling to come to terms with who she’s become.

It all boils over when the Kingdom crew return the missing melon to the Saviors. Richard tries to explain the painful lesson they’ve learnt and how they’ll play by the rules in future. His plan is to earn the Savior’s trust, so they can later catch them off guard. No sooner does he start talking, than Morgan knocks him down, and brutally chokes Richard to death to the shock of both the Saviors and Ezekiel. Morgan explains what Richard had done and – in tribute to Richard’s original plan – how they plan to play by the Savior’s rules. Richard dies for the greater good, as he hoped… but not how he expected. This trigger point forces Morgan to abandon his peaceful principles – far from a cause of celebration – and suffer a breakdown, equating the loss of Benjamin with his son Duane, a pain he had tried so hard to repress. This desperation urges Morgan to inform Carol about the reality of Alexandria, which he’d earlier tried to avoid.

When Carol learns that Glenn and Abraham were killed – and about Rick’s plan to fight Negan – her response is no surprise. This doesn’t make the moment any less powerful, and I’ll confess to my stomach knotting (and eyes slightly dampening), as she returns to Kingdom to tell Ezekiel “We have to get ready. We have to fight.” In a season so bereft of character arcs or inner turmoil, we genuinely believe that Carol (played with steely restraint, as ever, by Melissa McBride) has faced down her demons to walk the path she’d vowed to avoid, yet has no choice but to tread. As Morgan says to Carol earlier in the episode, when doubting the truth of her self-imposed exile: “You got away from everyone. Is it what you wanted? Or was it just too late to get away?”

Bury Me Here showcased The Walking Dead at its best (slower paced character studies informing big decisions) and worst (Benjamin’s death had been predicted by fans weeks ago, as so often happens to non-core characters who dare to display virtue), but at least it delivered its more obvious beats with economy and structured repetition (like Katy’s backpack, or Benjamin reciting Morgan’s lessons in his dying breaths: ‘To injure an opponent is to injure oneself’), that felt genuinely affecting. Season 7’s real conflict isn’t between Alexandria and the Saviors, but the paralysing devotion to the graphic novel’s storylines, and its leading stars’ contracts.

The show is crawling toward all out war, but we know Negan will appear in season 8, and Andrew Lincoln is simply too integral to be dispensed of, neutralising the tension. Bury Me Here confirmed that the show is best when exploring its own material outside of the comic arc (like the recent Eugene episode), and exploring the borderline-insane coping mechanisms of those who inhabit its universe. “This is how we must exist now. It is mere luck we are not all insane”, deadpans Ezekiel, the theatrical dreadlocked ruler of a slowly failing community, who keeps a pet tiger.