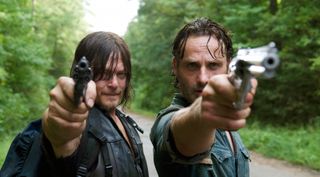 While we don't know which cast member of The Walking Dead will be on the receiving end of a barbed wire bat in the season 7 premiere, the brutal death will most definitely have a massive impact on Rick and the rest of the group going forward. That impact even extends to the actors themselves, as Norman Reedus - who plays Daryl, a fan-favourite character many think Negan will kill - told Entertainment Weekly that the cast reunion was "exhausting", "no fun", and "not joyous", before teasing the dark times that lie ahead:

"I mean, it’s a brand new world right now. It’s a complete change of power. Our whole world has been turned upside down, and that group of people have been fighting to have their feet firmly on the ground and have some sort of direction to live in and some sort of code to live by and moral compass, and they thought they were doing it okay, you know? It was hard, and they had to go through things all the time, but they were on a path, and now that path has been ripped from their feet, and things that they believe in are completely different now. The world is completely turned upside down".

Although times are almost always tough for our Walking Dead characters, Negan's arrival means things will be bleaker than ever on the show. It will be interesting to see which loyalties do and don't survive the adversity ahead.

The Walking Dead returns to AMC with its season 7 premiere on October 23, 2016.