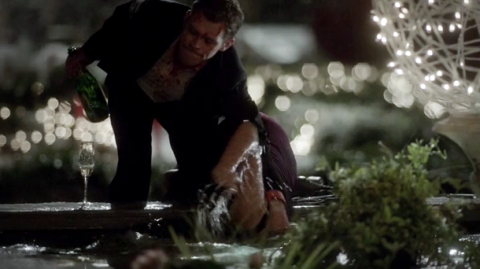 THE ONE WHERE Klaus kills 11 hybrids and Tyler’s mum, Prof Shady cures Jeremy of his desire to kill Elena. and Damon finally compels Elena to break the sire bond, but not before Stefan finds out he’s been prevaricating and assumes a great angry face.

VERDICT So, mid season finale, and once again another attempt to kill Klaus goes awry, and Klaus goes on a killing spree.

Although there’s a definite sense of déjà vu , it’s refreshing to see Klaus remind us why he’s so feared (too often recently he’s comes across as a mere panto villain), and the werewolf massacre is a highlight. Perhaps all that guff with Klaus showing us his artistic side was just to soften us up and make his blood rage all the more effective?

On the other hand, Hayley’s multiple double-crossing that leads to the massacre is as convoluted as hell. Considering she has to manipulate both Klaus and Tyler to make it happen, the plot is so full of potential pitfalls it’s a miracle it happened at all. And all for, what? So she can learn about her family? Has she tried Google? Her motives are as unconvincingly shallow as Phoebe Tonkin’s perma-stare acting.

The revelation that Professor Shady’s knowledge makes finding the sword redundant is introduced in such a “oh, and by the way” fashion you suspect even the writers were slightly embarrassed by this oh-so-convenient turn of events. The handy coincidences don’t stop there. What’s that? Shady knows where, Silas, the witch who can cure vampirism, is buried too? Blimey, he is the Swiss Army knife of plot devices, isn’t he?

Of course, he could be talking a load of bull. Not much else he says or does is on the level (we’re pretty sure that his programming of Jeremy has probably involved some reprogramming as well) so he could be selling Elena and Damon a fast one. But this kind of info should still feel like it’s important and dramatic. Vampire Diaries used to do these kind of plot bombs so well. Now they feel like everyday turns of event. And no, delivering an infodump over a rock – albeit a mystic rock, but still just a rock – doesn’t make a scene any more exciting.

The show is in danger of returning to season one mode, when there were lots of twists and turns, but they lacked real impact. Over the intervening seasons, the show had learnt how to deliver its revelations with some serious punch and resonance – hell, it was leading the way in the artform. But not here. Here the revelations just feel in danger of becoming aural wallpaper.

If that sounds harsh, then yes it is. The episode is pretty decent, all told. It just isn’t delivering in the way this show can do at its best, seemingly satisfied with a make-do approach rather than challenging itself to produce some real shocks. After all, we’ve known for a while now that Hayley has been setting up the hybrids for a fall, so while the massacre is exciting moment to watch, it’s not totally unexpected or jawdropping. Maybe that’s why the writers decided to have Klaus kill of Carol Lockwood – to give this mid-series finale some sense of WTF? But Carol’s not exactly a character we care that much about so it doesn’t really work. You’re more, “Aw, shame…” than, “Jesus Freakin’ Christ!”

The Elena and Damon scenes are good, though. I’m on the side of people who think that Damon’s more fun to watch when he’s not entangled with Elena and loved up; he’s better when he’s all grinchy and moody, so from a drama point of view it’s a sensible decision for him to wean her off him. But his his reasoning behind his resolving to go through with the de-siring feels believable and well written, and ends up rather sweet. Thank God the situation didn’t head into army-waving histrionics territory (though looking at Stefan’s “angry face” at the episode’s end that may be yet to come). It’s all rather British in its restraint, in fact.

April’s accidental induction into the underworld of Mystic Falls was also nicely handled. Be honest – when Caroline compelled her, you’d forgotten she was wearing Jeremy’s vervain bracelet, hadn’t you? Well, we had, so when Matt points this out to Caroline it’s a great, “Oh shit!” moment. Shame Caroline seems to have forgotten all about it a scene later. So, is April going to take the stake out of Rebekah? We kinda wish she had, there and then.

There’s nothing particularly wrong with The Vampire Diaries at the moment, but it’s not pulling out all the stops either. While the Elena-as-newborn aspect of the show is providing some fresh, fertile territory for the show to cover, elsewhere there’s a distinct feeling of been-there, done-that. Let’s hope Professor Shady’s plot finally kicks into gear in the first couple of episodes of the second half of series four, because The Vampire Diaries currently needs a rocket up it arse.

THE POWER OF A LOVING FAMILY Anyone else left totally unconvinced about Stefan’s sudden sympathy for Klaus? "What makes us better than him?” muses Stefan. “The only thing is, we have family we can trust." Hang on? Are we talking about the same vampire? The one who keeps staking Rebekah? The one who kept his siblings in coffins for years on end? Family trust doesn’t seem to feature big with Klaus. The whole conversation just seems to be a clumsy opening for Caroline to grass up Damon.

SHIRT OFF No completely shirtless scenes this week. Hell, this is the episode that opens with Elena and Damon in bed together fully clothed ! But Jeremy does strip down to his vest to show off the fact he’s been down the gym. Sadly the result looks like one of those pictures where they Photoshop some guys face on a body builder’s body… he looks slightly freakish.

A NEW CAREER? Professor Shane tries to entertain Elena and Bonnie with his ventriloquism act. Jeremy is so wooden he’s the perfect dummy…

NICK HEWER IMPRESSION OF THE WEEK Not that we’re picking on Jeremy you understand… but he does look uncannily like the presenter of Countdown doing his, “I disapprove” look.

And his painting’s crap.

CONTINUITY When Stefan can’t find the magic sword, Damon asks him, “Try the sock drawer… people leave the sketchiest things in the sock drawer.” Damon should know; he hid the white ash stake in his sock drawer in season three.

WHAT’S THAT NOISE? Damon makes the most peculiar noise when Stefan asks him about how Elena’s feeling now she’s been released from the sire bond. It’s a mixture of gulp and broken bed spring.

CHRISTMASSY The Winter Wonderland theme of the episode continues into the end title caption, which has a snowflake falling from the logo as opposed to the usual drop of blood.

BEST LINES
Klaus [to Stefan]: “You’ve been dodging; Caroline's been lovely; which I’ve come to recognise is a tool of distraction. Now, do you have something to share with me or shall I compel it out of you?”

• Need to find an episode review? Check out our new TV Reviews Index
• Read more of our reviews for The Vampire Diaries season four