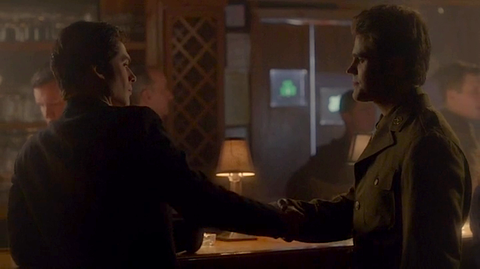 THE ONE WHERE Stefan and Damon travel to New Orleans to try to find a witch who can break Elena's sire bond.

VERDICT Flashback episodes of The Vampire Diaries are usually good value, but this one falls a little flat. Aside from the prerequisite batch of revelations (Expression magic! Sacrifices! Sire bonds can’t force you to love someone! Lexi looks silly with a Frisbee on her head!) and the fact the 1940s setting is an excuse to get Stefan and Damon in uniform for the delight of viewers into that kind of thing, the episode seems happy to motor along in second gear.

Damon is quickly, easily, and rather undramatically convinced about Elena’s sire bond. You’d have thought he would have spent at least an episode in denial relishing his newfound power over her before DOING THE RIGHT THING! But no, he doggedly gets down to business, dragging Stefan to New Orleans with him so they can argue, make-up and reminisce.

The flashbacks, however, aren’t particularly exciting or atmospheric. It’s a bit of a waste of Lexi, who was great fun the first couple of times we met her in past seasons, but here is little more than a vampire care worker. Where’s the sharp, witty tongue? Where’s the joie de vivre ? She’s so dour! And the big dramatic moment it all leads up to – when Damon, gasp, puts Stefan before himself ! – is a about as exciting as a weather forecast in the Mojave desert.

Thankfully, there are some good bitchy exchanges between Stefan and Damon, and Damon’s former Sire bond, Charlotte, is freaky fun in a potential bunny boiler way (you have to love the idea she’s been counting every brick in New Orleans to prove her love for Damon). Never at any point, though, does the setting feel authentically New Orleans.

Back at Mystic Falls Caroline and Elena are falling out, while Hayley is pulling Tyler’s strings, goading him into being the Alpha male he needs to be (it’s interesting that it’s the female werewolves/hyrbids who are the real motivators, poking their more lethargic males into action – a comment on life in general, perhaps?). Again, there’s nothing particularly wrong with any of this (except, perhaps, another cringeworthy piece of product placement) but it’s not particularly memorable either. There are little gems of moments that keep the episode bubbling along entertainingly – Caroline hugging Elena so hard she can’t hug back, Bonnie going bad-ass witch, Shane telling Hayley that her parents are dead, but that shouldn’t prevent her meeting them – but too many key moments fail to spark into life. The worst offender is the scene with all the hybrids bowing to Tyler; it should be stirring but just looks very cheesy.

The episode ends on a high, though – Damon determined to put an end to the sire bond, but Elena pleading with him not too. While much of the episode misses the mark, this is a cliffhanger with real emotional clout.

SHIRT OFF First scene – Damon, in bed. Quickly followed up by a half-naked werewolf called Adrian.

JOINING THE DOTS The evil “Expression" magic Damon seeks in the 1940s requires the sacrifice of 12 human souls. Pastor Young sacrificed himself and 11 council members in the season premiere. Shane wants 12 unsired hybrids. Are you stroking your chin thoughtfully yet?

LEXI! She’s back! Lexi has appeared in one episode per season so far.

TRIVIA And you’re not going to get much more trivial than this: “We’ll Always Have Bourbon Street” is the longest The Vampire Diaries episode title ever (so far…)

TITLE TATTLE And while we’re talking about that episode title, it’s possibly a reference drawn from two sources. Obviously there’s the famous line from Casablanca : “We’ll always have Paris”. But it could also be referencing a Sting track. Honestly. “Moon Over Bourbon Street” was a track from his 1985 album The Dream of the Blue Turtles , which was inspired by Anne Rice’s Interview With The Vampire . The lyrics include the lines:

Just be thankful they didn’t play it on the soundtrack. Oh yeah, and Damon love a glass of Bourbon…

QUITE HAPPY TO BE CORRECTED ON THIS ONE Maybe we missed a line somewhere? Didn’t Damon and Stefan notice that Charlotte didn’t exactly seem cured of her sire bond when they returned to New Orleans? Stefan even pointedly emphasises that she’s spent 70 years "literally” counting every brick in New Orleans (as Damon had suggested back in 1942) which pretty much confirms he knows she’s still sired. And yet they still seemed surprised when it turns out the witch pulled a fast one and never broke the bond at all.

BEST LINE
Damon: “I’m going for a drink. Hunt me down when you stop being a dick.”

• Need to find an episode review? Check out our new TV Reviews Index
• Read more of our reviews for The Vampire Diaries season four