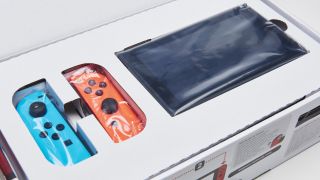 A report from New York Times writer Nick Wingfield claims that the Nintendo Switch is already a massive success for Nintendo. Although exact numbers weren't shared, Nintendo of America president Reggie Fils-Aime told Wingfield that the system has easily trumped launch weekend sales figures for the Wii U in the Americas, and it's even overtaken the original Wii as the company's best-selling product at launch (again, in the Americas).

2. Fri-Sat sales for Nintendo Switch exceeded first 2-day sales in Americas for any system in Nintendo history. Next biggest was Wii.March 6, 2017

It would be impossible - and a bit silly - to make a prediction about Nintendo's future success or failure based on this information, but what it does tell us is interesting nonetheless.

This is the first home console in a long time to be released outside of the typical holiday window, which shows that gamers' wallets aren't as tied to the season as many likely think. The number of units produced and sold exceeding the Wii also gives me hope that Nintendo has figured out its production pipeline, and hopefully there won't be months upon months of dry spells like back in 2006 and 2007.

In the meantime, Nintendo fans, be happy: you've got a sizeable number of comrades out there.