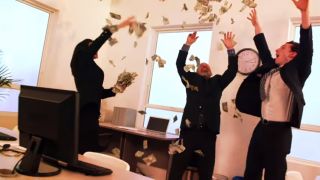 Want to go on a Summer Sale worthy Steam spending spree without any of the guilt and credit card debt? Our pals at PC Gamer are putting together a new event at their second ever PC Gaming Show that will let you buy as many games as you want for your very own Steam Library. In front of a roaring crowd. For three minutes.

If you think you've got what it takes to spend potentially thousands of dollars of someone else's money in the Steam Speedrun, here's what you need to do: head to Twitter and share a 10-second-or-longer video saying what you'd do with three minutes of infinite Steam money (you can think of it as a PC port of the Nickelodeon Super Toy Run, if that helps) using the #pcgamingshow hashtag, follow @pcgamer's Twitter account, and be able to attend the show in Los Angeles on June 13. Check PC Gamer's site for all the official details.

May the deals be ever in your favor.