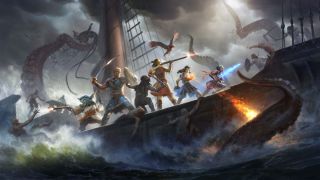 Obsidian  worked wonders in creating a wonderful tabletop-esque adventure with the Pillars of Eternity games. Now you can take the sprawling fantasy epic on the road when Pillars of Eternity: Complete Edition comes to Nintendo Switch next month.

Launching on August 8, Pillars of Eternity: Complete Edition includes all additional content, including The White March: Parts I & II expansions, and updates from the PC version. It'll also have updated controls and UI that match the Switch's handheld and TV modes, a raised level cap, expanded party AI options, and new difficulty levels. You can check out the announcement trailer for the Switch version right here:

After having an incredibly successful Kickstarter campaign that brought in almost $4 million, the original Pillars of Eternity launched in March of 2015, then PlayStation 4 and Xbox One in 2017. It's an "isometric, party-based computer RPG set in a new fantasy world" with real-time, tabletop-like combat that can be paused at anytime for tactical decision making. It's a fantastic rendition of Dungeons and Dragons in game form.

Pillars of Eternity joins Fire Emblem: Three Houses, The Witcher 3: Wild Hunt, Dragon Quest XI, and even Link’s Awakening as another sprawling adventure game on Nintendo Switch. You should be occupied for sometime if you're a fan of stepping into gigantic fantasy worlds.

Looking for another RPG to play since you've already beat Pillars of Eternity? Check out the 25 best RPG games to play right now (and inevitably over-invest emotionally in).