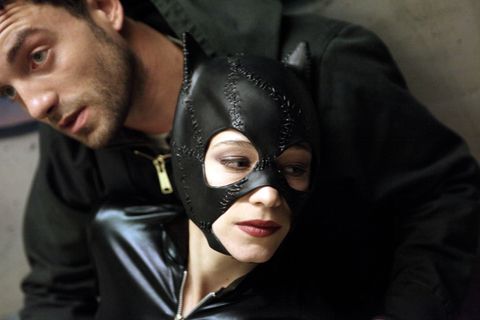 THE ONE WHERE Adele and Simon kiss, and Julie’s neighbour is killed.

VERDICT A satisfying episode, because there are some pretty big developments, with the finale delivering a double whammy: Adele kissing Simon (doubly satisfying if you spent much of last episode screaming, “ Touch him! He’s obviously not just a ghost!” at the TV), and Julie’s nosey neighbour ending up as cat food, presumably thanks to little Victor. We'd already seen that the Returnees who were "normal" in life have a dark side – Camille wrecking her sister’s bedroom in a fit of jealous rage; Simon glassing the guy in the diner – but this seems like confirmation that they have come back somehow... inhuman.

There are some welcome touches of humour this week. Camille gets some good lines, wryly asking her Dad if he’s worried smoking will give her cancer, and suggesting she and fellow Returnee Simon could “start a club”. And there are some great performances too: Jean-Celine Sallette is particularly impressive in the scene where she spots psycho Serge through a bus window.

It’s also encouraging to see a mystery answered quickly, not left hanging forever – last week we saw the scars on Julie’s stomach for the first time; how she acquired them is confirmed right at the start of this episode. Of course, in the tradition of Lost , as soon as one question is answered, another is posed – what the hell is that scar on Lena’s back? Judging by her reaction to it, it's new.

But the scene which will probably stick in the memory most (particularly for lonely fanboys with sapphic superhero fantasies…) is the flashback where Julie and policewoman Laure kiss while dressed as Catwoman and Batman. It’s a pretty eye-catching way to out two of your characters, and it brings some unexpected pop cultural levity to a series that’s generally rather sombre.

Criticisms? Just two. Firstly, try as you might, you can’t make malfunctioning toilets ominous. Giant beetles crawling out of sinks, yes; blocked bogs, no. Secondly, wouldn't it be nice if those reservoir workers eventually got something to say other than, “It’s fallen another two metres"? So far, those actors really drew the short straw…

WAS IT A DELIBERATE IN-JOKE... To start the episode with someone dressed as the Tim Burton take on Catwoman, and end it with a dead woman being licked by cats?

SPECULATION Could Lena’s scar be related to the apparent psychic bond between her and Camille? What the hell was that bloody mess in the kitchen bin at the Seguret house – has Camille been scoffing bunnies? And what’s the deal with the scene where Julie believes she’s being attacked by Serge but it appears that she actually imagined the whole thing? Has she imagined him before? If so, could the power of her imagination have something to do with why he’s come back? We know that Adele has "seen" Simon before, so could there be a connection there?

Read all our The Returned series 1 reviews.