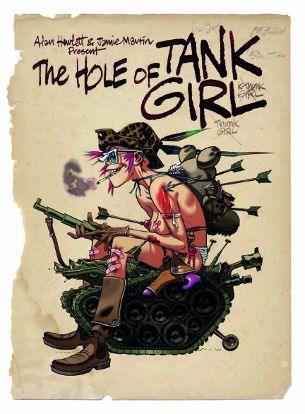 Now celebrating her 25th anniversary, Tank Girl is a figure of contradictions. Her combination of fearless, two-fingers-to-the-world self-determination and scowly, fag-in-mouth sex appeal make her simultaneously a feminist icon and a male fantasy – albeit the sort who’d boot a bloke’s bollocks off for daring to drool over her. Though maybe her creators’ summary is more succinct: she’s “the kind of person who left pubic hairs on your deodorant.”

The existence of this hefty, slip-cased, lovely-posh-paper edition compiling all 41 original episodes from British comics mag Deadline (plus bonuses like designs for the rubbish movie adap, unfinished pencils, the original draft script for the first episode and stuff from the creators’ college fanzine) feels faintly wrong , in the same way as a coffee table book of Sex Pistols graphics. In other ways it makes perfect sense, because Tank Girl is well suited to casual browsing.

Jamie Hewlett (best known nowadays for Gorillaz) and Alan Martin bashed the strips out in a mad frenzy - in some cases, only 10 days passed from original concept to newsagent’s shelf. That infuses them with punky energy, but means there’s no strong narrative throughline, rather a series of blind alleys – something their creators repeatedly acknowledge, with winning self-deprecation.

Tank Girl ’s pleasures reside elsewhere, in its madcap surrealism (in one, God’s dressing gown turns someone’s genitalia into those of a humpback whale, leading to death by erection; in another, the characters end up in a “forest” that’s actually a reader’s pubic hair), metafictional kicking-down of the fourth wall (Tank Girl frequently addresses the reader, or her creators), barrages of pop culture references (everything from Easy Rider and The Prisoner to Crackerjack and Bullseye ), and colourful obscenities (our fave: “Wank sandwich!”, with “You veiny nob licker!” coming in a close second).

Lacking any real depth (she drives a tank, goes out with a kangaroo, and is forever waking up with a killer hangover – that’s about it), Tank Girl may work better as a poster than a character, but she’s so iconic, and Jamie Hewlett’s anarchic art so glorious, that you can forgive the flimsy storylines. Worth splashing out on? If you already own the three remastered collections from 2009 and art book The Cream Of Tank Girl , probably not. Otherwise, sure.