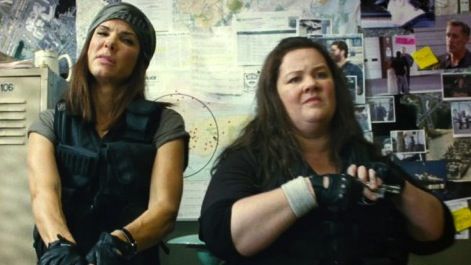 A brittle but brilliant FBI agent is thrown together with a boorish, foul-mouthed street cop to bring down a ruthless drug lord. After initially clashing, the mismatched pair begin to develop a mutual respect and, ultimately, a friendship. Sound familiar?

Yet this time round, it’s the girls’ turn to step onto the ever-revolving buddy-cop merry-go-round and far be it for Sandra Bullock and Melissa McCarthy to deviate from the formula one iota.

So, with expectations of originality flung from the window of a speeding car, it’s down to the two leads to charm their way through the clichés. They half manage it.

McCarthy, as slobbish policewoman Shannon Mullins, is a riot. Dragging bad guys from their cars while dressed like a refugee from the Grateful Dead and swearing like a Scorsese boxset, she gives the character shadings that might have disappeared in less skillful hands – especially when dealing with her stereotypically shrill, Bostonian Irish family, who seem to be auditioning for a remake of The Fighter .

Sadly, the same can’t be said for Bullock, whose uptight agent Sarah Ashburn is a one-dimensional character the star struggles to enliven.

The Heat is director Paul Feig’s first outing since Bridesmaids , a film that here casts a huge, hilarious shadow.

Though there are brief flashes of the previous magic – especially in a scene where the pair bond by getting messily, black-out drunk – The Heat can’t keep pace with its predecessor’s laugh-rate.

But where it does live up to Bridesmaids’ towering standards is in its realistic sense of a bumpily blossoming friendship.

It’s to Feig and writer Katie Dippold’s credit that there are no love interests acting as third wheels, allowing Mullins and Ashburn’s womance to evolve alongside the action.

It’s just a shame it does so without a few more giggles and a load more surprises.

Following the buddy-cop handbook to the letter, The Heat is derivative stuff, but McCarthy gives it the kick it needs to keep rolling along.