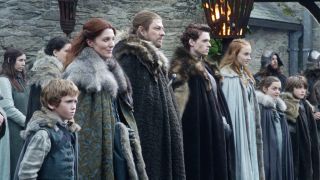 The Game of Thrones season 8 opening might not be exactly what you were expecting. Swords and, yes, sex are so often the name of the game that anything less than that to kick off the show’s final six episodes might seem like a bit of a letdown. But that’s what we’re getting – and it’s a very clever bookend that echoes right back to the Game of Thrones pilot. Mild spoilers await…

The big EW Game of Thrones season 8 feature reveals that the premiere begins at Winterfell “with an episode that contains plenty of callbacks to the show’s pilot. Instead of King Robert’s procession arriving, it’s Daenerys and her army.”

If you remember, the end of Game of Thrones season 7 included Jon Snow and Dany making their way towards Winterfell, as well as engaging in some other icky, incestuous extracurricular activities. So, it’s little surprise that, with the Night’s King finally making his way south, barely a moment has been missed in the interim.

“What follows is a thrilling and tense intermingling of characters,” EW outlines. “As they all prepare to face the inevitable invasion of the Army of the Dead.” Basically, shit is going to go down. It’s a little wonder that there’s only six episodes left. Time is running out. And running out fast.

It’s the mirroring of the pilot, though, that’s probably going to hit home for many fans. The first-ever episode, which features the Stark ancestral home of Winterfell preparing for King Robert, Queen Cersei, and the rest of the Lannister clan coming to town, instantly marked Game of Thrones as a show to keep an eye on with its outstanding ensemble cast and familial in-fighting. Let’s hope it ends better than the bitter putdowns, backstabbing, and near kid-killing that littered the show’s opening hour.

Game of Thrones has come a long way since 2011, not least with half of the Stark clan growing up in front of our very eyes. It promises to be emotional, entertaining and, with Sansa and Dany meeting for the very first time (I know, I can’t believe it either), deliciously engaging.