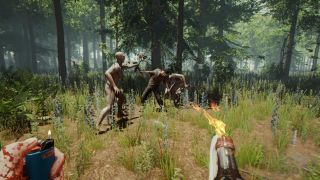 The Forest cheats provide a variety of codes and commands to change the game on PS4 or PC. Whether you want all the items, brighter caves, or creative mode you can trigger it on command. Even if, for one reason or another, you just want to exterminate all the enemies, you can.

Thanks to the developers, we don’t have to install any mods or external programs, all of these codes are built in to the game. We’ve compiled a list of (in our opinion) the most important and useful ones.

How to use The Forest cheats on PS4 and PC

These are more game mode modifiers than full on cheats, but can make life easier (as well as harder). To activate these on PC, just type in the command on the main menu and you're done, no need to hit enter or anything. You can do the same on PS4 as well if you plug in a USB keyboard but it seems more like a legacy PC thing than actual feature - so don't be surprised if they're patched out at any time without warning.

When you input the codes, you won’t get any notifications or confirmations, they’ll just work. You also might not be able to change some of these after you’ve typed in the code without starting a new game.

Here are the codes you can enter:

How to use The Forest console commands on PC

The following commands only work on PC and can change a lot more of the game. To start with, type in developermodeon at the main menu screen. There won’t be any notification or anything but you can press F1 to see if it’s working as it should bring up a box in the left corner where you can type in the codes.

I would err on the side of caution from this point on. Some of these console commands could heavily affect your save file. So if you don’t want anything too bonkers to happen or run your run, steer clear. If you feel comfortable heading onward, here’s how to activate console commands.

After you’ve typed a command from the list below, press enter to activate it.

The best console commands for The Forest on PC

This is a list of the most popular commands that you’ll likely find useful initially, although you can find more from the wiki. Just press F1 after activating developer mode from the main menu, as per our instructions above, type in the commands, then hit enter.

buildermode on / buildermode off
This turns on buildhack and god mode. Turns off survival mode, enemies, and adds all items.

cavelight on / cavelight off
Pretty self-explanatory, it make caves brighter.

faststart on / faststart off
Skips the plane crash cutscenes.

godmode on / godmode off
Take no damage. Unlimited stamina, fullness, water… You get the idea, you’re invincible.

cancelallghosts
Removes all blueprints. It can be loud if you’ve got loads so lower your volume.

buildallghosts
Build every blueprint that you’ve placed down, can also get very loud depending on how many you’ve placed.

addallitems
Use to add all items apart from story items.

addallstoryitems
Fills in the gaps and adds all the story items as well.

itemhack on / itemhack off
Unlimited items, however, you must have the item to begin with.

survival on / survival off
No need to eat / drink etc.

save
Saves the game. No matter where, when, why…

speedyrun on / speedyrun off
Super fast sprinting. Can be buggy though and you can get some serious air sometimes so try not to die.

invisible on / invisible off
Allows you to walk/run underwater but it doesn’t wash you anymore. Rain still does though.

killallenemies
Does exactly what it says on the box, careful though, they will respawn.

enemies on / enemies off
Disables or enables cannibals and mutants.

additem 77
Live rabbit, put it in a rabbit cage for safe keeping.

forcerain sunny
Tired of bad weather? Force the sun out.

cutdowntrees 10
Cuts down 10 trees, you can change the number.

cutdowntrees 100%
100% will cut down all the trees,you can change the percentage.

cutgrass 10
Cuts grass in a ten radius around the player. Will be laggy if too large size radius is chosen.

And that’s it, the most popular and useful commands on The Forest.