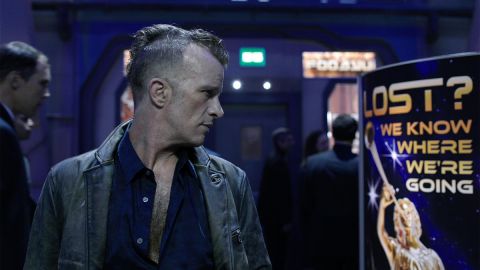 Static proves that even when The Expanses favors dialog over action, it still delivers surprises and tension.

Not much actually happens in Static. The Roci, having miraculously survived a showdown with a stealth ship, is in sore need of repairs at Tycho Station, leaving her crew an unexpected amount of free time. They drink, they play handball, they hit the club, they talk. They don’t really do all that much, and yet Static still manages to leave you breathless.

With some help from Amos - who continues to defy the trope of trigger-happy meathead - Holden gets important information from the lone surviving scientist who was working with Dresden on the protomolecule. It’s an exposition dump that serves to fill in a lot of blanks about what might be happening to the Belters on Eros, but examination of the scientist also reveals that his brain’s been altered. Everyone working on the protomolecule project has had the part of their brain that governs empathy burned away; they’re not monsters driven by a pure love of science, they’re victims who are being used just as much at the Belters. The Expanse excels at knowing the tropes of its genre and subverting them to give you unexpected moments like this, where you end up feeling for someone who’s unquestionably done terrible things. Will we discover that Julie Mao’s dad, who’s behind the protomolecule experiments, has similarly complex motivations behind his machinations? I do hope so.

Holden’s still super-pissed with Miller for shooting Dresden in the head and kicks him off the Roci, leading him to bunk with, lord help him, Diogo. Miller and Diogo have another conversation that may as well have been the two of them saying “character development” back and forth to each other, but it did lead to one important moment: when Diogo calls Miller “beltalowda.” Back on Seres, Miller was “well wala”, or a traitor to his own kind, so for Diogo to welcome him back to the fold by calling him “beltalowda” was both sweet and significant. Miller’s not spending every day wishing he was Earthside anymore, he’s fighting for his own people, and they appreciate him for it. Which is why it’s odd to see him talking to the Mormons about hitching a ride on the Nauvoo, the giant ship being built for them on Tycho. They haven’t launched yet because although the engines are working perfectly, the engineers haven’t quite managed to get the environmental controls just right, and when you’re planning a hundred-year voyage, your air supply kinda matters. So, big honkin’ ship that can’t safely hold people, but runs like a dream. We’ll come back to that.

Remember how the Martians blew up Phoebe, and Earth decided they had to retaliate with a proportional show of force? Well, blowing up Deimos is the way they choose to go. They kill 17 people doing it, but that’s not what really gets to Bobbie Draper and her Martian marines. The way they see it, Earth just keeps screwing with their sky. Sure, Deimos was just a point of light to them, but it was their point of light, and Earth took it away, just like it took away any chance they had of seeing a blue sky on Mars in their lifetime. The Martians want a war so badly they’re taking it out one of their own who happens to have been born on Earth. And you can see where they’re coming from, really. Static sets up the contrast elegantly, with Chrisjen and the UN on Earth as the chess masters and Bobbie and her marines as the pawns. We get to see the conflict from the views of those moving the pieces and those who are most affected by the outcome. We see how both sides are right, in their own way, and we sit back helpless to do anything to stop what appears to be the inevitable conclusion.

Right. We can’t fix the whole war thing that’s going down, but maybe there’s something to be done about Eros. Oh, by the way, people on Tycho are turning the sounds coming from Eros into music, which is super creepy, but also pretty good techno. Of more immediate concern is that there are words coming from Eros, so either there are still some Belters alive, or the protomolecule, which evolves and learns as it gobbles up biomass, is developing language. Seems pretty clear that this would be a Bad Thing and that Eros needs to go, but it’s a freakin’ asteroid. How do you destroy an entire asteroid? So, about that honkin’ big ship with the perfect engines…

This is what makes The Expanse so damn good. It would’ve made perfect sense for Miller to have taken off on the Nauvoo. He’s lost his job, he found Julie Mao, he’s kicked off the Roci - he’s got nowhere to go and nothing to do. And others may find the concept of living their entire lives on a ship to be disconcerting, but he’s a Belter; his feet have never touched soil anyway. But characters on The Expanse are more complex than that; they’re smart, and flawed, and stubborn, and unreasonable, and sentimental, and everything humans actually are, instead of what makes a TV show nice and tidy.

But man, the Mormons are gonna be pissed.

The Expanse S2.03 review: "Man, the Mormons are gonna be pissed"

Static proves that even when The Expanses favors dialog over action, it still delivers surprises and tension.