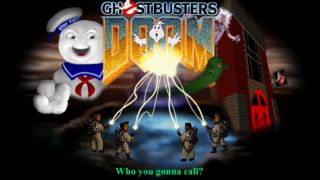 Doom. A crusty old shooter with a dull modern sequel, or something more? The answer is a lot more. With a passion for user-generated content even way back in 1993, iD's John Carmack deliberately designed Doom to be easily editable for players. Level and graphic data was stored in WAD (Where'a All the Data?) files separate from the main engine, meaning that with a bit of knowledge, anyone could learn the basics of making their own game powered by Doom's tech.

Today is Doom's 20th Birthday. Believe it. From '93 right up to the present day, people are still modding it. We've had successes, we've had failures, we've had classics and we've had baffling artifacts of digital mind-abuse that FPS may never, ever recover from. Here are ten of the best around.

Once again (again!) we must ask why Sega failed for so long to get a 3D Sonic right when the fans always seemed to know exactly how to handle one. SRB2 blends speed, control and a decent camera with some actual platforming replacing the traditional on-rails boredom. It looks like proper Sonic, it sounds like proper Sonic, and for the first time in years the hedgehog is drawn as he should be rather than looking like a big gangly git.

A lot of Doom mods make tweaks to level design and gameplay style but still look unmistakably Doom. This wild west reworking however, couldn't feel more different. With action taking place through a wide, open, sun-bleached western town and complimented by full sprite and sound replacement, it would be unrecognisable as Doom if it weren't for the weapons. And even those have been limited to scenario-plausible ones. It's like some long lost 1994 wild west shooter that never saw release.

Long before Terminal Reality ever got near the Ghosbusters license, there was this. Tragically unfinished, but still playable in part, the plan was to recreate both movies with a 32 level total conversion for Doom 2. Judging by the attention to detail seen here and the quality of the screenshots elsewhere on the 'net.

Another brilliant mod that totally changed the whole feel of the game, the legendary Batman Doom does a brilliant job of evoking the bright and brash comic book version of ol' capey's world. Every major Batman villain you can think, from The Scarecrow to The Joker to Bane, pop ups over its twenty levels--a quick look at the character list shows a boggling amount of work on the part of the designers--and the ambience is absolutely bang on. Now if only someone would do a Dark Knight update...

You've probably seen the reskinned Mario Doom already, but this is a much more exciting prospect. So far the producer has approximately reworked the Super Mario Bros. levels 1-1 to 1-4 in full first-person 3D, even going so far as to work out how to kill enemies by jumping on them. We don't know how far this project is going to go, but we want more. Now. Yesterday in fact.

Void is a great example of a Doomer using the existing tech as a springboard with which to create something really fresh and new. A unique Lewis Carroll meets H.P. Lovecraft affair, the surrealism drips from every inch of its skewed monsters and hallucinogenic environments, creating something very un-Doom with an atmosphere all of its own.

Is that a set of dual-wielded pistols we see there? It certainly is. Seems we're not the only ones interested in putting existing games in first person. An ancient tomb, blow-dart booby traps, environmental puzzles and platforming... It's all vintage Lara, only trimmed down to fit the constraints of iD's aged shooter. If you squint, it could almost have been a secret first-person mode for the first Tomb Raider.

Lunacy. Utter lunacy. Sky May Be is a notoriously out-of-its-mind mod, developed with the intention of being "the strangest WAD ever made". On no level does it fail in that lofty boast.

It's packed with garish Lego-style design. It's littered with cryptic text and Windows iconography. The enemies are insane and the weapons defy all natural laws of human logic. We're going to stop trying to evoke its madness for the good of our own mental health. Just watch the video and let its creator explain more. We fear that in his case, the damage is already done.

Nuts takes Doom's in-your-face approach and smashes it repeatedly into your face until it breaks through into the back of your skull, turning your brain into a lumpy grey smoothie in the process. Containing such an insane number of monsters that it's killed the PC of many an unsuspecting Doomer, the below video is the only one we've managed to find that has any semblance of a frame-rate whatsoever.

Cyberdreams is a really, really interesting spin on the traditional game. It might look like plain old demon-blasting Doom on the surface, but the clever part comes from the new gameplay structure. Imagine Doom spliced with Portal. Rather than traditional levels, Cyberdreams consists of a series of challenge rooms, each involving killing or escaping one or moreof Doom's monolithic Cyberdemons. The catch is that you have barely anything in the way of weaponry and have to use environmental puzzling skills to escape with all of your limbs intact, making enemy in-fighting and telefrags the order of the day. Very clever indeed.