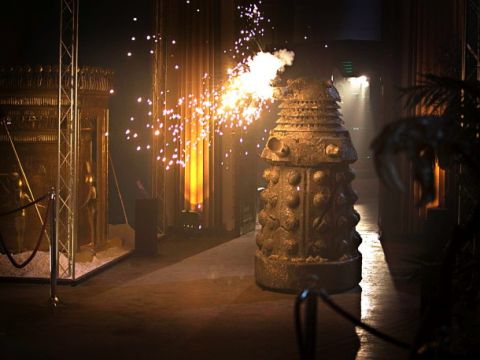 Rarely has the end of all things been quite so much fun...

THE ONE WHERE
With Amy dead and the TARDIS blown up, the Doctor travels back from the future to give Auton Rory the sonic screwdriver that will help the Doctor from the present escape from the Pandorica. We’d try to summarise more but our brains (and possibly the entire universe) could well explode.

VERDICT
Hands up who expected the second part of this year’s Who finale to play out like that? Having gathered together the Doctor’s greatest enemies in the ultimate legion of doom last week, part two ditches them almost completely – aside from some very creepy petrified Daleks – in favour of a personal, intimate drama with some very, very high stakes. It could hardly be more different to “The Pandorica Opens”, yet Steven Moffat pulls off the remarkable feat of making it feel like the logical denouement of last week’s outing.

The end of the universe is old hat for the Doctor, but never has the big crunch been quite so pleasingly complex. This really isn’t a story for casual viewers, with the sheer volume of nods to previous episodes and mind-bogglingly wibbly-wobbly timey-wimey stuff leaving you in a state of perpetual head-scratch. Why is the Doctor suddenly allowed to break his cardinal rule about crossing his own timeline? If the Doctor is trapped in the Pandorica, how does his future self give Rory the sonic screwdriver? It makes no sense at all, but seeing as time travel is entirely speculative, you really have to give Moffat the benefit of the doubt – especially when that flashback to future Doctor giving Amy a pep talk in “Flesh And Stone” reveals the true genius of the Who boss’s very, very clever story arc.

Even if there are several plot holes, it’s difficult to get too worried about them when the story packs such a strong emotional wallop. A hero is well and truly born when the wonderfully likeable Rory volunteers to spend a couple of millennia protecting his fiancée, while the Doctor’s trip back through “repeats” of his life is real something-in-your-eye stuff. And rarely have taps of the sci-fi reset button been so satisfying, as “The Big Bang” shows that season finales don’t necessarily have to end on a downer. Indeed, a wedding scene where Amy not only ties the knot with Rory and gets reunited with parents previously sucked out of existence, but also conjures up the Doctor from (literally) nowhere – thanks to the old “something borrowed…” wedding rhyme – is a happy ending completely fitting with the season’s fairy tale vibe. Yes, that Mr Moffat really is a clever chap.

DID YOU SPOT?
The way the Doctor hops backwards and forwards in time leaving notes for Amelia is very Bill And Ted’s Excellent Adventure. Bodacious.

DID YOU SPOT? 2
After “The Pandorica Opens”’ very deliberate nods to Raiders Of The Lost Ark , Auton Rory’s vigil protecting Amy is rather reminiscent of the grail knight’s task in The Last Crusade .

NITPICK
Yes, we know the Dalek’s power was depeted, but surely its laser beam shouldn’t be repelled by a Sky dish. Could this be the Beeb’s attempt to win over the Murdoch family, perhaps?

THE FEZ LOOKS FAMILIAR
Matt Smith’s said on several occasions that he’d like to wear a hat next year. Will we see Doctor 11 sporting a fez?

SPECULATION 1
The Doctor says the “Silence” is still out there. Wonder if that’ll form the basis of next year’s arc plot?

SPECULATION 2
Why doesn’t the Doctor start regenerating after he’s been shot by the Dalek? Does he shut down his regeneration system like the Master did at the end of “Last Of The Time Lords”?

SPECULATION 3
River and the Doctor’s post-wedding exchange hints that they really are going to be husband and wife, but can it really be that simple? Can’t wait to see what River has in store for the Doctor next time they meet, though – how exactly is everything going to change?

SPECULATION 4
It looks like the web rumours about a Christmas special on the Orient Express might be correct, but which queen is it phoning the Doctor? Liz 10, perhaps, or maybe Queen Elizabeth II, still grateful for that night the Doctor saved Buckingham Palace from a crashing Titanic?

BEST LINE
The Doctor: You can do loads in 12 minutes. Suck a mint, buy a sledge, have a fast bath...