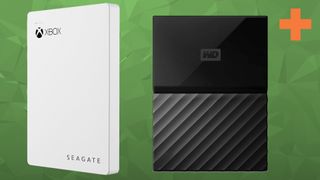 Such are the general improvements and refinements made across the hard drive market now, a lot of them are only the size of a phone, and use a simple USB connection to slot into your Xbox One with little fuss and very neatly. And, for the convenience chasers among you, once you've formatted an external HDD, you can just leave it plugged in, use it at your leisure and barely think about it again. It's so simple and so cost effective. If you're constantly downloading games, and have an Xbox Game Pass subscription or Games with Gold, it's an essential item to have.

Making a decision on the best Xbox One external hard drive is ultimately driven by what you want from a portable HDD. As we've heard from the recent conversations about the next generation of consoles, speed is a massive factor, with HDDs being almost wholesale replaced by SSDs whenever the opportunity presents itself. External SSDs are more expensive, however, but the faster read and write speeds they bring to the party can massively reduce load times and any time spent copying files from your console. Elsewhere, and probably for most users still, capacity is king. The larger the better. Most Xbox gamers will look to for at least 4TB or north of that to really get value from a single hard drive, while some just need an extra 1TB to keep a few more games within arms reach that they play regularly. Reliability is a key factor, especially if you're going to be carrying your HDD with you regularly. You don't want something made of cheap materials that will damage easily and potentially lose all your game saves and installs with the slightest of bumps. And finally, very importantly, price is key, too, as, while HDDs are essential, they aren't the most exciting of purchases. All in, one of the best Xbox One external hard drives really are one of the most essential Xbox One accessories.

Below is a selection of the best Xbox One external hard drives, balancing value for money against performance.

Our top pick for best Xbox One external hard drive belongs to the Western Digital 4TB My Passport series. We used to recommend a 2TB drive (which is still more than large enough for most people), but with Xbox One X ownership rising and the increased size of 4K games, this is the best way to future proof yourself. In terms of features, this USB 3.0 (and USB 2.0) compatible hard drive offers 256-AES encryption and cloud storage, along with WD's own backup software. In reality, all you really need to know is that this hits the sweet spot of size, speed and affordability. This 4TB external hard drive will store up to 40 Xbox One X games (or more), and up to 100 or so regular Xbox One games. Basically, it's a monster, and with a three-year limited warranty, there's every reason to buy with utmost confidence. It's available in a 2TB option, too, but 4TB feels like maximum value.

We have a new budget pick for the best Xbox One external hard drive. The Toshiba Canvio Advance is a lovely piece of kit: it comes with a glossy shell, a simple design, and a neat, blue power-light on the top. It doesn't require an additional power source, and simply plugs into the USB port on your Xbox One console and... just works. It has read and write speeds to match all other drives on this list, and comes with a two year warranty as standard. If you want to use it for PC too, it has password protection and automatic file back-up, which are both useful features that elevate this model above our previous budget pick, the Canvio Basics. The only real drawback of the Advance is that it doesn't come in a green color, which means it won't complement your console. However, you can get white which does look slick next to most Xbox consoles. You should be able to grab the 1TB version for around $50 / £50, which makes it a genuine bargain too.

The official Xbox One external hard drive (and it's a good one too!)

This officially branded external hard drive on Xbox One comes in 2 or 4GB options giving you a choice depending on if you want to go for media storage, or games. It's basically a regular Seagate drive in a flashier case, and you're paying about $15-20 extra for having the (admittedly quite nice) embossed Xbox logo and official green case colour. If your budget allows, and aesthetics are important to you, it's functionally still a great choice, and you can often find it on sale. The Seagate 2TB Game Drive in official Xbox green often drops in price around big retail events, so while now is a great time to buy, we'll surely see reductions in the new year sales.

If you're not worried about official branding, this Seagate 4TB drive at Walmart is currently $40 off at $89.

The Seagate Expansion 8TB is USB 3.0 compatible and offers more storage than you'll likely ever need. It's the ideal choice for the prolific Xbox One user who wants to buy one hard drive and never have to think about storage again. The huge storage capacity raises the price, obviously, and the 8TB drive requires an external power adapter (supplied in the box), but is surprisingly elegant for such a large device. At 2.09 lbs with dimensions of 4.75 x 6.93 x 1.44 in, the Seagate Expansion 8TB is also considerably lighter than rival large capacity external hard drives, such as the WD 8TB My Book drive at 3.0 lbs with dimensions of 1.9 x 5.5 x 6.7 in.

You will need to buy a separate USB 3.0 caddy to use this, since the connector is Serial ATA-600 not USB 3.0, but they're circa $10 and easy to install. At 500GB you're not getting the best price-to-storage ratio, but what you are getting is the speed of an SSD external hard drive on Xbox One. That means it's solid state memory, rather than an actual spinning disk. You won't immediately feel the difference when accessing media files and in-game video, but the speedier loading times can make a noticeable improvement in games like, say, Far Cry 5 where warping across the map causes the game to reload. If you want a great 500GB SSD drive, but don't want to buy an external USB 3.0 caddy, we recommend the Samsung T5 Portable 500GB. It's about $60 more expensive than buying a Serial ATA-600 (SATA) SSD drive and a USB 3.0 caddy - but that's the premium for having USB 3.1 (which is USB 3.0 compatible) built in.

If you're worried about your HDD breaking, because you're always throwing it into a backpack or taking it into the great outdoors, the Lacie Rugged is for you. This tough little monster is dust and rain resistant, and comes with a rubber shield around the body of the HDD which helps protect it from impact damage or shock. That means if you drop this drive, it's far more likely to work perfectly afterwards.

Transfer speeds are similar to other drives, as is the size of the unit itself. The orange color and chunky shape won't be to everyone's liking, and the higher price will put some people off, but if you're worried about damaging your external drive then this is the toughest of the lot. We recommend the 1TB drive, as it's on sale now, but you should be able to get the 2TB version for around $100.