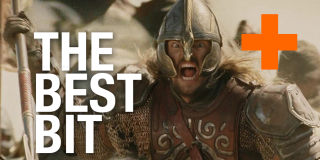 The thing I love in action movies, perhaps more than anything else, is the moment where a final ray of hope breaks through clouds of oppressive gloom. The Lord of the Rings trilogy is rich with these - the fall of Boromir, Gandalf’s return to Helm’s Deep, Merry and Pippin finding a floating ham at Isengard - but none rival the ride of the Rohirrim for scale, threat, and hoof-thundering frisson.

Return of the King does an incredible job of building up to it. It starts much earlier, with the lighting of the beacons, which is easily my second-favourite bit in the film. I can hear that music as I type this. I know it’s just panning shots of mountains and CG bonfires, but Howard Shore’s score - trying saying that after a flagon of Rohan ale - gives it an almost celestial significance. It helps that my favourite bits in Tolkien’s books are the page-long descriptions of mountains (I’m a sucker for a handsome prominence), but I love it primarily because it sets in motion the events that lead to the best cavalry charge in the history of cinema. And yes, I have seen Dino de Laurentiis’s Waterloo.

The film is paced well enough that you almost forget that Theoden of Rohan is on his way to lift the siege of Gondor. There are enough twisting subplots in the city itself to narrow your focus to what’s happening behind the gates - Gandalf is rushing to stop Faramir from being burned alive when the Rohirrim finally arrive.

Now, Peter Jackson doesn’t agree with me, but I think this moment works best in the extended edition, when the Witch King of Angmar interrupts Gandalf, knocks him off Shadowfax and shatters his staff. Gandalf the White, who until this point has had a magical answer to every question, is brought low by an enemy who seems unstoppable. “Do you not know death when you see it, old man? You have failed. The world of men will fall...” There’s enough fear in Ian McKellen’s eyes to make you believe it. And then, at the moment when everything seems utterly lost, you hear it; a lone horn, ringing in the near distance. Rohan has answered the call.

When I first saw this, I only had one thought in my head: they cannot win. Theoden only just survived Helm’s Deep. But suddenly, faced with odds that can only lead to ruin, he begins to act like a king. The theme of Rohan, which has sounded like a lament for two entire films, subtly changes as Theoden belts out his speech. There’s a moment of acceptance in the faces of Eowyn and Merry. They know they’re about to die, but they’re no longer afraid. After a huge, screaming surge, they advance towards a host that until now has shown no fear whatsoever. “Ride to ruin, and the world’s ending!” It’s the final act of a people about to be destroyed, just like the Anglo Saxons that inspired them.

Arrows fly towards the Rohirrim, and pikes are lowered to skewer charging horses. It should slow them, but they barely notice. The music builds, and the charge gets faster. Gothmog, the orc commander so unafraid of death that he literally spits on trebuchet projectiles, barks a panicked “fire at will!’. It’s met with even more vehement cries of “death!”. Somehow, when you think the charge can’t get any faster, it does. The orcs turn to flee, and you know that Rohan has done it. It builds to a crescendo of guttural, clashing violence - the sort of movie moment when you can feel the blood pumping behind your eyes.

This is the best bit in Return of the King. It loses its way slightly after this - thanks to swarms of glowing green ghosts, multiple endings, those bloody eagles - but it barely matters. It delivers a level of satisfaction which is deeply, lastingly nourishing, and it’s the part I look forward to most whenever I start my annual viewing of the trilogy. In an era where action set-pieces in blockbusters feel increasingly like clinical, CG rollercoasters with zero emotional engagement, the ride of the Rohirrim moves me every time I see it.