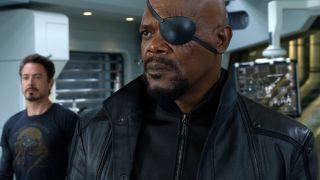 Samuel L. Jackson is perfect as Nick Fury. Marvel thought so too – except, way before the MCU was even a thing. The publisher used his likeness to portray the S.H.I.E.L.D. director without his permission in an Avengers comic, which is a big no-no, but somehow led to Jackson being guaranteed the role as Nick Fury in the MCU. No, I don’t quite understand how that works either.

As revealed during a THR profile on Jackson, 2002’s The Ultimates comic run by Mark Millar included the iconic actor’s face without getting any sort of image rights. “I had no idea when we used his likeness he even knew who the Avengers were," admits Millar.

The trouble was, Jackson was, and still is, an avid comic book fan, so when he stumbled across his own face staring back at him from an Avengers comic book he understandably wasn’t happy. Take a look for yourself and see what you think…

Most would have sued Marvel to high heaven. Jackson, and his agents, found another way to remedy the situation. Instead of taking what probably would have been a large payment for ripping off the image of one of the most recognisable movie stars on the planet (seriously, what were they thinking?), Marvel instead offered up a different solution: saying sorry and, crucially, give Jackson a role in one of its new Marvel movies.

And that was that. The foundations of the MCU were, weirdly, put in place all because of copyright infringement and one giant apology. And from the sounds of it, he has no plans to hang up the eyepatch anytime soon, saying: "I could be the Alec Guinness of Marvel movies," in reference to the original Star Wars Obi-Wan actor, who starred in A New Hope at the age of 63.

No one tell Jackson that he was 58 during his Iron Man debut. Because that might cost you.

Samuel L. Jackson has appeared in most of the best Marvel movies, but do you agree with number one?