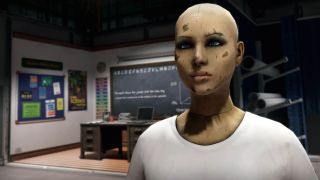 VR gaming is still in a frontier state, where any title could be 'that one' that sets a new standard and pushes the platform further towards mainstream success. EVE Valkyrie was the first VR game I played that felt like it could flesh out competitive multiplayer on a headset - and in nDream's upcoming first-person adventure The Assembly, I get the sense that this could be the breakthrough game for VR storytelling. The Assembly's atmosphere and atypical setting evoke memories of BioShock, Half-Life, and Dishonored, with the way they all delve into mysterious, alluring slices of what feel like fully-realized worlds. The difference here is that you won't have to fight for your life, leaving you free free to explore and evaluate your immersive surroundings at your leisure.

You see through the eyes of two different protagonists: Cal Pearson, a disgruntled scientist working within the Assembly, and Madeleine Stone, a disgraced doctor who's kidnapped and forced to undergo the Assembly's application process. The cryptic circumstances of the Assembly organization will draw you in immediately, as the game opens from Madeleine's dazed perspective during her abduction, giving you brief glimpses of this top-secret facility buried deep beneath an arid desert. Like BioShock's Rapture, the Assembly is a doomed endeavor built on benevolent ideals: a highly advanced laboratory where doctors can conduct tests and research free of ethical constraints and government checks. The Assembly hasn't fallen into Splicer-inhabited disarray quite yet, but you get the sense that something sinister is bubbling beneath the surface of all these progressive experiments.

Those suspicions are confirmed fairly quickly from Cal's perspective, when you discover that the Assembly has been continuing work on an avian-based virus Cal developed and subsequently tried to terminate. Besides the all-encompassing first-person perspective, Cal's chapters make inventive use of the VR medium. Peering through a microscope gives you a close-up 3D view of the virus' cells which looks great in VR, and the labs, halls, and offices you snoop around while seeking evidence of foul play are some of the most believable (if not a tad mundane) VR environments I've explored yet. Making progress is a steady, methodical process, as you gather clues or discern door codes from computer terminals and environmental hints. From what I played, the beginning chapters (with 12 total) employ the right mix of exposition, discovery, and puzzle-solving.

Things are a lot weirder - and consequently more intriguing - on Madeleine's side, as one of the shady higher-ups in the Assembly tries to coax you into joining the cause. Madeleine's mental aptitude is tested via a series of chambers connected to her swanky but claustrophobic quarters, first in a giant, Portal-esque room of shifting cubes, then later in an elaborate logic puzzle dressed up as a murder mystery. The latter was the highlight of my demo: a group of creepy mannequins were seated at a dinner table next to a backstabbed dummy, and I had to deduce which two suspects deserved a knife in their own back, linking bits of backstory from nearby dioramas reflecting each diner's profession. I was so engrossed in my efforts to correctly solve this riddle, I didn't even realize that the prolonged exposure to VR was making me a bit nauseous. Fortunately, The Assembly lets you fiddle with the control scheme, offering blink-forward movements and snap-to camera turning if the more traditional methods of motion are making you queasy.

It's unlikely that The Assembly will make waves the same way BioShock did when it debuted; VR is still a niche, this story is aiming for a shorter runtime of around four or five hours, and the lack of FPS action lessens the appeal for those who don't fancy the pacing of point-and-click adventures. But that sensation of piecing together the history and ecosystem of a strange yet conceivable space - complete with objects and imagery that exist as non-essential bits of environmental world-building - is what makes The Assembly so fascinating when compared to the wealth of first-person puzzlers already available for VR. Rather than revolving around clever gimmicks or short-lived thrill rides, The Assembly feels like the realization of a captivating world and a gripping story. You'll be able to explore The Assembly for yourself on Oculus Rift and HTC Vive starting July 19, or try it on PlayStation VR later this year.