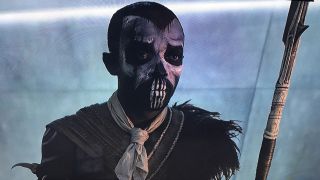 Warning: Spoilers ahead for the plot of the Assassin's Creed movie.

If you thought the Assassin's Creed movie was missing some key members of the Brotherhood, you'd be right. While it was alluded to that the Abstergo prisoners alongside Michael Fassbender's Callum Lynch were descendants of Assassins from the games, we didn't actually get to see their historical alter egos. Until now that is. The Assassin's Creed movie is out now on DVD and Blu-ray in the US (Europe has to wait until May 15) so I've cast my Eagle vision over the extra features. 'Lo and behold, one particularly juicy deleted scene called 'Protect the Apple' has a stack of well known faces from the games.

You'll already have seen the start of the scene in the cinematic version. Fassbender's Cal is sitting in the dining room, having just been threatened by the modern day Assassins about giving up the location of the Apple of Eden. However, after he asks himself what the fuck's going on, the scene actually continues. Aguilar, his Spanish Inquisition Assassin ancestor, appears and starts chanting. Via the Bleeding Effect Cal then gets a good look at the hooded historical Assassins with blood running into the present day. First up...

We already knew that Williams' character Moussa's ancestor was Baptiste from Assassin's Creed Liberation, but it's nice to see him in full regalia within the minimalist walls of Abstergo. Baptiste started out as an Assassin before joining the Templar Order and holing up in the Louisiana Bayou where he was taken out by member of the Brotherhood, Aveline de Grandpre. In the movie, Moussa has taken his fighting style from Baptiste but thankfully none of the Templar villainy.

I'll hold my hands up here. I initially thought suspicious Abstergo prisoner Nathan was meant to be a descendant of Shay Cormac, but instead he's another Assassin turned Templar, Duncan Walpole - are you sensing a theme here? This particular turncoat you'll recognise from the start of Assassin's Creed 4: Black Flag as you and Edward Kenway kill him and steal his hidden blade at the very start of the game. You'll catch a glimpse of Nathan battling with a pirate blade during the final Abstergo battle in the movie as the Assassins fight for freedom.

And there he is, the closest Assassin we're going to get to Ezio Auditore. You'll find the head of the Ottoman Brotherhood of Assassin's in Assassin's Creed Revelations where he teams up with Ezio himself in Constantinople. In the movie his descendant, Emir, stays pretty quiet, but warns Cal off giving up too much information on the Apple of Eden. Unfortunately during the final battle, while the Turkish Assassin manages to unlock the Animus room, he's overcome by security and doesn't make it out with his fellow Brotherhood members.

While it's exciting to see the other characters, there's something incredible about seeing this particular Assassin. Again, around about the same time period as Ezio Auditore, Chinese Brotherhood member Shao Jun was trained by the master Assassin and featured in her own game, Assassin's Creed: Chronicles China. Her descendant in the movie, Lin, played by first time actress and martial artist Michelle H. Lin, battles in the final sequence with Jun's signature killer foot blade and even throws around her rope dart. Spoiler: they're both pretty deadly.

And if all those game references just weren't enough, you can spot Assassin's Creed Unity hero Arno Dorian's combo blunderbuss and axe, the Guillotine Gun, in another deleted scene. Cal's father Joseph Lynch, played by the ever-excellent Brendan Gleeson, smashes open the cabinet and uses it to aid in an alternate version of the final showdown within in Abstergo.