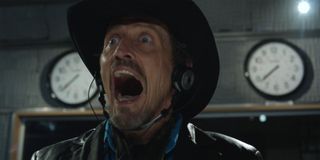 Sometimes you don’t want good, or clever, or funny. Sometimes you want weird. Sometimes, you want the cinematic equivalent of marching into your local convenience store with a raw chicken on each foot, screaming things about our benevolent lizard overlords. That’s why this list exists - to give you an instant shot of the weirdest shit you can watch on Netflix right now.

Some things here are gently strange, others barely watchable. There are obviously films that should be on this list, but they’re only available in certain countries. So, strictly speaking, you could watch David Cronenberg’s Naked Lunch on Netflix right now, but only if you have an account in Saint Kitts and Nevis. (Yeah, that’s actually a thing.)

The Strange Color of Your Body's Tears (UK)

Do you need anything more than the name? It conjures images of oozing fluids and lurid 70s Giallo films, when the only thing that mattered is how long and senseless the title was. (I’m looking at you, Four Flies on Grey Velvet.) In theory, this is a movie about a man searching for a his missing wife, but that’s too pithy a description for a film that feels more like having your eyes gouged by a unicorn horn. It’s the cinematic equivalent of opening a gloriously wrapped present to reveal a box full of used plasters and woodlice - it looks lovely, but the contents make zero sense and will leave you feeling quietly disgusted. And if you like the sound of that, check out Amer, too - another production written and directed by French filmmakers Hélène Cattet and Bruno Forzani.

Beyond the Black Rainbow (Canada)

Let’s ignoring for a moment that a black rainbow wouldn’t be a rainbow at all, and try to simplify things. Beyond the Black Rainbow is a film about heavily drugged woman trying to escape from a secluded commune. There’s muddled logic to what’s happening, but it’s still a throbbing, chaotic, nightmare, that exists just to mess with audience heads. It’s a compliment to say that director Panos Cosmatos feels like the bastard child of David Lynch, David Cronenberg and Jean-Pierre Jeunet, and it makes this more than just art-house guff. That said, there are still moments that feel like watching a lava lamp full of suspicious bodily fluids. Which is nice, if you like that sort of thing.

A Girl Walks Home Alone At Night (US)

A Girl Walks Home Alone At Night is a black and white fever dream about a shadowy, skateboarding vampire who preys on evil men. It’s been described as the first (and almost certainly last) ‘Iranian Vampire Western’. As well as the Spaghetti Western influence, Ana Lily Amirpour’s directorial debut is a rich genre casserole of graphic novels, horror and Iranian New Wave cinema. It’s weird, compelling and ghoulishly beautiful - hard to experience, but impossible to ignore. Now stop reading about it and go and watch it.

He Never Died (UK, US, Canada)

Henry Rollins is a furious immortal cannibal angel trying to reconnect with his estranged daughter, and if you got to the end of that sentence without starting to watch the film you should be damn well be ashamed of yourself. Honestly, just go. You can come back to this excellent feature later. He Never Died isn’t as strange as other stuff on this list, but its mere existence warrants inclusion. It sounds like an urban myth, or a lie made up by a bullshitting friend: “Henry Rollins? And he’s an angel? And he eats human flesh? Yeah, whatever mate.” If nothing else, this is proof Netflix should have a section dedicated to Henry Rollins films. Heck, everything should have a Henry Rollins section. Including GamesRadar+. Leave it with me..

It would be betrayal not to have a Stuart Gordon film on this list. Re-animator is probably the most well-know choice, but From Beyond is Gordon at his weird, flesh-melding best. Anyone who knows horror will expect sucked out eyeballs, wiggling fleshy proboscises and Barbara Crampton being menaced by otherworldly forces - no surprises there -  but for the uninitiated this is a senseless, pan-dimensional mindfuck. It’s aged badly, but there’s something raw and uneasy about seeing all those oozing, slime-covered practical effects. Lovely.

No, it’s Not Life of Pi - it’s stranger than that. That’s right: this makes a movie about a man stuck in a dinghy with a CG tiger seem normal. Pi is a surrealist film directed by Darren Aronofsky, the director of Black Swan, The Wrestler and *whispers* Noah. It follows a troubled number theorist as he tries to make sense of the world through mathematics. It’s a technically a thriller, but in a challenging, unfamiliar way - instead of explosions and guns and ruffians, the struggle is all inside one man’s head. It’s a grim movie to watch at times - you’ll know the part I’m talking about if you’ve seen it - but overall it’s still a cerebral, enriching experience.

Primer is a low-budget sci-fi film about time travel, and the debut of the terrifyingly-talented Shane Carruth, who wrote, directed, scored and starred in the film. In keeping with almost everything on this list, it’s a difficult film to watch - it features an experimental plot, confusing philosophical implications, and complex dialogue that mathematics graduate Carruth decided not to simplify. Yeah, that’s right - he’s a maths genius, too. If you enjoyed this, you should also check out his other, equally-weird feature, Upstream Color - another film he did literally everything for.

Pontypool is a horror film about language, told from the perspective of a local radio station. It’s a cool setup. Veteran Canadian actor Stephen McHattie puts in a career-best performance as a former shock-jock turned small-town radio host, who finds himself at the centre of an outbreak of unexplained mob violence. Unlike some of the stuff on this list, it’s a coherent story, but the setting and explanation are unsettling. Don’t write it off as a simple zombie movie - this is smart, witty, humane and unusual. Oh, and it’s set in Pontypool in Ontario, Canada, not the one in Wales. That would be rubbish.