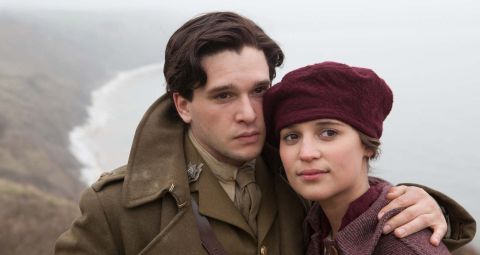 The battle of Brittain.

It’s well crafted,” says Vera Brittain (Alicia Vikander) of a poem by suitor Roland Leighton (Kit Harington), “but I don’t see you in it.” On the surface, the same faint praise could be levelled at James Kent’s adaptation of Brittain’s WW1 memoir. It’s a handsomely mounted, resolutely old-school work: the epitome of “well crafted”. Yet, incrementally, led by Vikander’s star-making performance, the film mines a real depth of feeling.

This is an unusual account of World War I, the trenches seen only in abstract cutaways or dreamlike visions while Kent focuses on the women left behind. Although Brittain famously volunteered as a nurse, Juliette Towhidi’s screenplay never allows this to dominate. Instead, Kent paints a rounded portrait of social change and shifting gender dynamics, underscored by persistent grief.

Proto-feminist Brittain is a passionate, sometimes petulant figure who prefers being one of the boys, enjoying innocent days out with brother Edward (Taron Egerton) and unrequited admirer Victor (Colin Morgan). So it’s a surprise – not least to Vera – when Leighton’s arrival cues poems under doors and cheeky escapes from the chaperone.

Harington is dashing if rather wet, but Kent’s handling of the looming tragedy gives resonance to the romance. Significantly, Vera’s relationships with Edward and Victor receive equal emphasis, ensuring that we remain invested in her prayers for their safe return. Vikander is the film’s barometer – delighted as her spikiness beguiles stern Miranda Richardson’s university professor, devastated as the reality of war shatters her perfect world.

Vera’s jump from self-absorption to empathy achieves gravitas on the front line, tending to wounded Germans alongside Hayley Atwell’s hilariously tactless nurse (“Get some antiseptic for the filthy Huns!”). In contrast, Vera maintains her respect for the war’s human cost – and Vikander makes us feel every death.