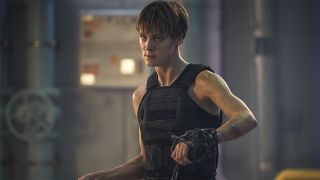 The first thing you need to know about Terminator: Dark Fate is that Linda Hamilton's back as Sarah Connor - and that's just so right it needs no further explanation. The second thing is that Mackenzie Davis' new character, Grace, is a hard-edged time traveller who fights like a Terminator but claims to be human. Director Tim Miller, who is coming to Dark Fate fresh from Deadpool, has given us some more details about Grace's backstory and inspiration in an interview with Variety.

Miller said Grace will be a protector, like Kyle Reese or the T-800 in Terminator 2. It's tempting to position Grace as an almost literal hybrid of those two characters, being a "machine fighter" who combines the spirit and resourcefulness of humanity with the strength and tenacity of a machine. But Miller said there's more to her than that.

"It’s a painful life, and [machine fighters are] scarred and take a lot of drugs to combat the pain of what’s been done to them," Miller explained. "They don’t live a long time. It’s a very sacrificial role; they risk death to save others. And from the very first suggestion it was always a woman. We had to look for someone who has the physicality, but I’m very sensitive to actors. I didn’t just want a woman who could physically fit the role but emotionally as well. Mackenzie really wanted to do it; she came after the role. She worked harder than anybody."

Miller also took particular delight in responding to comments from Internet Assholes who threw hateful comments at Davis' character, as she occupies a role that's traditionally belonged to men (or man-like machines) in other Terminator films.

"If you’re at all enlightened, she’ll play like gangbusters. If you’re a closet misogynist, she’ll scare the fuck out of you, because she’s tough and strong but very feminine. We did not trade certain gender traits for others; she’s just very strong, and that frightens some dudes. You can see online the responses to some of the early shit that’s out there, trolls on the internet. I don’t give a fuck."

We may be living in a dark future of our own, but at least we have Amazon Prime Day game deals to look forward to.