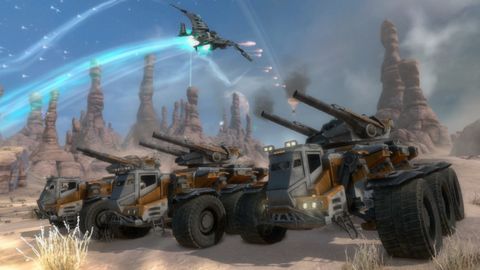 Starhawk is the spiritual successor to 2007's chaotic, multiplayer-driven Warhawk. This update adds real-time strategy elements, a single player campaign and its own version of horde mode. With these new additions, the third person action game takes on an even more unique identity all its own. RTS elements add layers of depth and the multiple game modes provide plenty of variety. The short single-player campaign will get you started and the complex gameplay mechanics of the various multiplayer modes will keep you coming back to perfect your tactics.

Warhawk was notorious for having a steep learning curve for those trying to compete with the pros in the multiplayer. To help relieve some of that frustration, Starhawk provides a story campaign that feels like a long tutorial. The short, but entertaining story plays off a Wild-West-In-Space theme that makes for some interesting, frontier-like environments. Cargo star ships reflect the design of a train, characters wear bolo ties, and even dusty, backwater towns show up from time to time.

In the space cowboy world, civilization revolves around rifts – dangerous sources of energy that earn prospectors a pretty penny. The problem is, anyone exposed to the rift energy becomes a corrupted humanoid monster called a Scab and the Scabs constantly raid Rift Jumpers to take the energy for themselves. A rift salvager named Emmett plays the hero, clearing out Scabs from raided rift wells and making a living off the contracts.

The story mainly plays out in animated cutscenes between levels and is interesting enough to pull you through the short five-hour campaign, but there's nothing that is particularly memorable about it. We ran into some spotty AI from companion characters that left them disappearing at random or endlessly running on walls. There were also a few ugly looking indoor areas that tarnished otherwise impressive, stylized visuals. Other than that, the campaign does a great job at teaching players how to use the base building system and the control the various vehicles. So, once you get done with the campaign, you are ready to jump right into Starhawk's main event, the multiplayer.

Capture the flag, deathmatch, team deathmatch, and Zones (which has teams capture points on the map to build their team score) make up Stahawk's multiplayer modes. The added RTS gameplay mechanics make multiplayer much deeper than it was in Warhawk. Rather than find weapons, ammo, and vehicles scattered around the map, players will have to build structures that spawn these upgrades. Defensive walls and turrets can also be constructed, which comes in handy for protecting the team flag and creating choke points. This also makes teamwork all the more important when going up against a well organized opposing team. Communication and strategy is almost essential to getting a win, since plenty of time and resources can be wasted if everyone on a team ends up building the same structures. Killing enemies and performing accolades like landing a drop pod on an enemy's head earn experience points, which can be used to unlock character skins and passive skills.

The greatest strength to Starhawk's multiplayer is it supports diverse playstyles and all of them are fun. Defensive players can spend time building bases around team flags and domination points while offensive players can jump in a vehicle and ride head-on into the fray. Vehicles like the Ox heavy tank provide an insane advantage in firepower, while the Hawks have you zipping around the map bombing enemy bases and dogfighting for air superiority. One of the coolest things about the title's namesake vehicle, the Hawks, is they transform from a speedy jet to a walking mech on command - enabling players to decimate infantry and fly off when things get too hairy. Although, we found ourselves hopping in vehicles to stay competitive, being on foot doesn’t mean you'll be completely helpless. Rocket launchers and grenades stand up against most vehicles, ensuring one player in a tank won’t be able to dominate an entire team.

We found ourselves enthralled with the multiplayer and had a blast causing as much chaos as possible. Every vehicle controls well and the shooting works as well as any other third person shooter. It does become a bit disappointing when we were placed on a team that didn't work well together, since that basically guarantees getting scraped. But Starhawk does make it very easy to create clans, with a built in creation and invitation system and clan calendars which is sure to please hardcore players.

Outside the standard multiplayer, co-op allows up to four players to fight waves of Scabs in a Starhawk version of horde mode. Rather than having to stay alive, protecting a rift well with select building options is the main priority. Each co-op match only lasts for ten rounds which is somewhat disappointing, but defending the rift with a few friends is a great diversion from multiplayer and a fun way to earn some extra experience points.

Starhawk is one of the most unique multiplayer experiences we played in a long time. The RTS elements create significant strategic depth and the action is a blast. Once we got a hang of the somewhat complicated gameplay systems of building bases and driving the various vehicles we didn't want to put the controller down. If you've been looking for engrossing, chaotic, large-scale multiplayer battles, Starhawk is going to satisfy your needs.