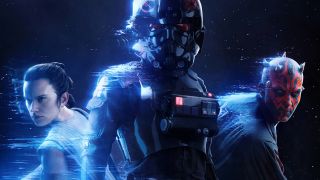 I’ll just get to the point. Star Wars: Battlefront 2 has a single-player campaign this time around. It has massive scope, starting right at the end of Return of the Jedi, and telling an epic tale of What Happened Next from the perspective of the now-fallen Empire. It looks brilliant, and got by far the most excited reaction at today’s EA Play conference, just prior to the start of E3-proper.

And now I’ve played it, and I’d like to tell you all about it, and why I’m even more excited now that I was earlier. So let’s start, shall we?

It’s set in the past, but has MAJOR story implications for all of Star Wars going forward

You know that red droid in the reveal trailer, the one with a screen for a face and an Emperor Palpatine hologram sneering forth from inside (and beyond the grave)? That droid is a very big deal. It’s not just a particularly creepy design for an answering machine, but rather the conduit for the Emperor’s last will and order. Watching the full version of that cutscene at the start of my demo – which takes in a mission from early in the game, just after the Rebels have beaten the second Death Star at the end of Return of the Jedi – I discover that old melty-chops had a contingency plan ready in case the Empire lost. It involves striking at the heart of the Rebel campaign, by destroying hope itself.

No word on exactly what the plan is yet – a Rebel attack fleet hits before I get a chance to hear the rest of it – but you will be fundamental to it, and it seems that the Emperor has no intention of letting the end of Jedi be the end of the struggle. Which makes a lot of sense, given that Star Wars: Battlefront 2’s campaign is a 30-year story, leading from the end of the original trilogy right up to The Force Awakens. Expect it to deliver the full tale of how the Empire hung on by its fingernails, and eventually evolved into The First Order.

The polish and attention to detail are stunning, even for Battlefront

It was obvious after the first game that Battlefront 2’s campaign was going to be a glossy, authentic affair, but the degree of polish in the single-player campaign – its developers in complete control of linear action this time – is astounding. The simple, first-person action of starting up a TIE Fighter’s engines at the start of the demo’s opening space battle is a startling ‘squint and it looks real’ moment, cockpit and hangar bay rendered in staggering detail. You’ll never have been so excited by Imperial gloves.

The standard is maintained throughout, every spaceship exterior and corridor interior feeling just right in a way that’s as arresting as it feels effortless. Every texture, every sound, every control panel, every single lighting effect... Once again, Star Wars: Battlefront is as much Star Wars theme park as Star Wars game.

The action is immediate, and the escalation is fantastic

Once out into the laser-strewn the fray of space, it’s the choreography that really impresses.  With dozens of ships of every size – from Rebel flagship, to Corvette, to X-Wing, buzzing around the beleaguered Star Destroyer, the sheer sense of scope and sweep is a giddying force. The shape, the scale, the pure movement and particular, kinetic feel of a Star Wars space battle are perfectly translated. The objectives in this early mission might be simple (pursue and destroy a couple of Corvettes, before protecting an Imperial ship through a tight interior, and then docking in the Rebel flagship), but the journey through them, guided yet freeform as it is, feels as legitimate as it is exciting. Which is very, in both cases.

It doesn’t hold back on big, empowering set-pieces

As I said, this demo is from early in the game, before things really heat up. But that doesn’t stop it from delivering a brilliant, ridiculous, stand-out Crowning Moment of Awesome as a piece of mid-level punctuation. Breaking into the Rebel hangar bay (after shooting out its shield generators), I’m confronted with a small problem. A whole squad of Rebel commandos, several pieces of heavy artillery, and a just-launched X-Wing. I’m a sitting duck. But I’m a sitting duck in a Tie Fighter.

I do the obvious thing, run the trigger, and destroy everyone and everything. Machinery, ship, and vulnerable, on-foot soldier alike all taste hot death, and the room continues to explode for what feels like minutes. I did wonder how easily I’d acclimatise to playing an Imperial. As it turns out, really well. Star Wars: Battlefront 2 makes being an overpowered monster really fun.

It uses the same neat ability set-up as multiplayer

I can’t stay in the cockpit forever. It’s time to get out, work my way through the ship to its bridge, and find a way of taking out the three Ion Cannons that are causing our Star Destroyer so much trouble. My tools with which to do this? A blaster, and some bonus toys, which operate in exactly the same way as the tertiary class abilities in multiplayer. One is attached to each shoulder button, another is on Triangle or Y, and all of them have cooldowns meters.

For this mission, I have a thermal detonator grenade, which can be launched to Battlefront’s usual ludicrous distance in order to crowd-control at long range. I also have a more powerful detonator, which in this instance can only be used once, but which goes off with the power of a thousand suns (give or take one or two), and I have a droid. Actually, I’m going to give that droid his own section. He’s brilliant, and a total asshole.

Your droid friend is a brilliant asshole

Don’t go expecting a cute, blooping R2 or BB8-type companion here. This is the Imperial side we’re on here, and they do things differently. A floating, bulbous, occasionally spiky little blighter, this guy – I don’t yet know his name, but am currently using J3-RK until informed otherwise – handles all the computer hacking and door-unlocking duties required by any self-respecting shooter protagonist infiltrating an enemy spaceship. But he also has one excellent, active ability on a cooldown. He can electrocute the crap out of people.

Dealing with a heavy bottleneck around a doorway? Send him forward, and he’ll unleash a close-range electrical blast that can drop up to five targets via the miracle of chain-lightning. Not only is this hilarious, and something the opposition just cannot do anything about, it also plays very well into Battlefront 2’s deeper, more interesting, option-strewn game. Because no, Battlefront 2 is not just the straightforward corridor-shooter you might have expected. Allow me to explain.

It has more depth and variety than you might expect

Reaching the entrance to the bridge (or rather two of them), I find myself with a couple of options. I can either blast on ahead, taking the combat-focused approach, leading into a big battle across the cavernous control room against an entire raft of Rebel staff, or I can try The Other Way. I choose the latter and - a quick crouch and a creep later - I’m moving from cover to cover, stalking and delivering silent takedowns as I go.

My opponents and the cover available are all very obviously placed to facilitate this, mind, and I’m certainly not going to get these sort of options all the time, but regardless it’s a satisfying and pleasantly surprising break-up of the relentless action so far. Particularly when I find a vantage point that gives me a clean shot at three blissfully unaware Rebels, and send in my flying electro-bastard buddy to drop them all in one fell swoop. After that, there’s a multi-wave shoot-out, as more Rebels swarm in to stop me from destroying the Ion Cannons’ power cores (they fail), and a rather ebullient crescendo it is too.

But wait, hang on, there’s one more little detail I need to mention. And it might be my favourite.

The door controls behave exactly as they should in Star Wars

ie. If you shoot their control panels, door locks instantly. It’s an odd quirk of Star Wars doors, that their mechanisms are sturdy as hell when locked, but can be triggered to close each and every time with a simple blaster shot. But that’s how it is. And that’s how it should be. And in Star Wars: Battlefront 2, it has great tactical purpose as well. Trying to access an Ion Cannon core, when you spot another squad of commandos sprinting up the corridor to stop you? A single pew is all it takes. Whoosh. Thunk. Not today, chaps.

And if you're looking for the place to find everything you need to stay on top of the rest of the incoming week of video game onslaught, simply click on for our big compendium of all things E3 2017.