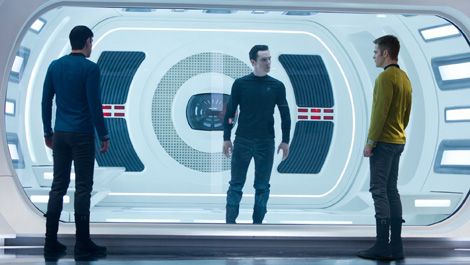 Two men hot-footing across an alien landscape as if they’ve got Usain Bolt at their heels. Someone yelling “If the volcano erupts, the planet dies!” A desperate plunge off a cliff. Last-second deliverance and then away into the night… Star Trek Into Darkness opens with thrusters on maximum – and then it puts its foot down.

With the origin-story, world-building, slightly tortuous parallel-universe-establishing stuff out of the way, J.J. Abrams embraces the chance to slip the leash in part two of his mission to make Trek viable, vibrant, cool again. Part one, a $385m hit in 2009, blew great clouds of dust off the decades-old franchise.

Still, it wasn’t perfect: despite efforts to widen appeal beyond the sci-fi hardcore, the dialogue often gave into gobbledegook. Then there was the underdeveloped villain, the hurried climax and an odd compulsion to leave Kirk dangling from ledges.

Into Darkness papers over many of the cracks. There’s a whole lot less trans-warp theorising for one thing. A more intriguing baddie than Eric Bana’s raving revenge-seeker for another. True, our new nemesis, John Harrison (a menacing, mystery-cloaked Benedict Cumberbatch) also has payback on his devilish mind, but it’s… complicated.

There are surprises dotted all over the spacescape, so we’ll keep the synopsis vague. Harrison, a former Starfleet high-ranker, does a Very Bad Thing. Kirk (Chris Pine) and the Enterprise crew go gunning for him.

They travel to hostile places, encounter faces new, old and new-old and do an awful lot of running, fighting and bickering. There’s less of the dangling this time out, but cliffhangers abound. The script feels structured around them; we hop from emergency to crisis to catastrophe and back again (and again).

Mostly, this is fantastic fun: a two-hours-plus blockbuster that doesn’t bog down in exposition or sag in the middle. There are reversals and rug-pulls galore, most of them executed with whiplash skill. Trouble is, at a certain point peril-fatigue starts to creep in, putting the story (like the overtaxed Enterprise) at the risk of burning out.

What’s more, this wild, plot-driven ride has a tendency to leave character moments on the back seat. Often, minor figures first time out remain minor figures, some of them left out in the rain until the narrative calls for them to make a reappearance.

Meanwhile, one emotional thunderbolt is undercut by an arguably too-cute wink to the franchise faithful.

Rewardingly, though, this isn’t Star Trek Into Vastness , a sequel that aims bigger but ends up bloated. True, there’s the sense of an expanded universe, and how it might determine the direction of future installments.

On the other hand, most of the drama is confined to the Enterprise, and all the better for it (if it’s expanse you’re after, judicious use of 3D brings added depth to those sleek corridors).

As for darkness, it’s there literally (firefights in the gloomiest corners of the galaxy) and figuratively, Abrams dragging his heroes over sticky ethical terrain (debates over whether to put villains on trial or on the chopping block; a scene where a good guy pummels a bad guy after they’ve surrendered).

But this is no hopeless dystopian vision; not when there’s Simon Pegg (back in a bigger, funnier role as engineer Scotty, complete with a cabbage-headed sidekick) dropping exasperated one-liners, or Karl Urban (medical man Bones) chipping in with colourful metaphors (“You don’t rob a bank when the getaway car has a flat tyre!”).

Shame that a romance teased in the first film only makes minimal progress here, but then it’s always been the Kirk-Spock, captain-first officer, love-hate thing that’s at the fore in Trek .

The prickly, tickly dynamic is alive and well here, a central thread running from get-go to wrap-up. If the cool, commanding Zachary Quinto already had a sure sense of Spock in the first film, it’s Pine who comes into his own here, essaying a more likeable, vulnerable, humble take on Kirk. Although he’s still a bit leery with the ladies.

But man of the match is, of course, Abrams. His aim with Into Darkness was to mint a standalone adventure, one that welcomed total Trek neophytes at the door. Mission accomplished – there’s buried treasure here for long-term fans, but this is a franchise flick that demands fanboy foreknowledge far less than it does slack jaws and high stamina.

After a confident take-off, Abrams keeps the franchise flying with a faster, faster, FASTER sequel that makes for the most thrilling Star Trek since First Contact .

Seen and loved Star Trek Into Darkness ? Get involved with our spoiler-filled discussion video below, or watch the gang talk about the movie's key bromance - and the possibility of a Star Trek 3 !