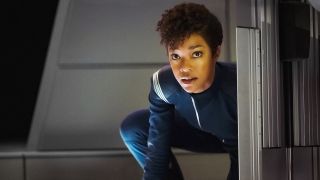 There’s been some consternation over Star Trek Discovery, Bryan Fuller and Alex Kurtzman’s new Star Trek prequel series, since it hit. It’s objectively a good show. A great one, in fact. But the debate continues over just how Star Trek it actually is. There are recognisably shaped starships, and warp drives powered by dilithium. There is a Federation of planets, eager, and optimistic to explore the universe and learn. There are Klingons, who are not fans of that Federation in the slightest bit. That’s all very Star Trek indeed.

But Discovery is also dark, bloody, and has us explore the Federation via a warship filled with jerks. There is no sign here of the traditional science-and-exploration vessel chock-full of loveable, mis-matched goofs (who make up a winsome adoptive space-family not despite their differences, But Because Of Them™). It’s mainly war. And darkness. And people you wouldn’t want to be friends with if you were desperate. And that is not very Star Trek.

Except that it really, really is. Let me explain.

It’s totally understandable that some long-term fans have knee-jerked against the approach taken by the new show. After more than 50 years of using loosely the same format - largely unconnected episodes, multi-threaded, ensemble storytelling, everyone is basically lovely - Discovery’s jump to a more modern, serialised story, a single-character perspective, and a morally troubled Federation full of stress, angst, and outright assholery has thrown some people right off.

But Star Trek Discovery isn’t a show you should knee-jerk against. You should give it some time, and take a step back. You should take a wider, less concrete view of what Star Trek is, why it is, and how it can express its nature. Because if you do all that, you’ll find that Discovery is about as Star Trek as it gets. The difference really, is just that Discovery is the Star Trek needed by 2017, not 1966, or 1987. More than that, it’s about the only Star Trek that would be palatable right now.

I’m not just talking about the structure of the show, although that’s a given. The quality and complexity of TV has accelerated exponentially over the last ten years or so, with deep, engaging, thoughtful writing and Hollywood-quality production values (and acting) very much making serialised drama the new home of high-quality, mature entertainment.

Where cinema used to be the bastion of weighty, eclectic, high-values production, and TV played it safe (and cheap), falling ticket sales and an explosion in digital home distribution have flipped the tables. And with so much smart, well-crafted TV now available at the click of a streaming button, any new show has to be up to cutting edge, modern standards, or be lost within the swelling mire of the dated and average.

Plus, the dense, mature Battlestar Galactica reboot kind of changed everything for TV sci-fi in 2003. There’s that too.

But beyond the mechanical standards of TV in 2017, there’s the thematic issue. And for Star Trek, that’s much bigger. Star Trek was always the hopeful view of the future. And it always should be. Star Trek was about the optimistic path, paved by the best of us, operating at our best, most capable, progressive and altruistic. It was about celebrating diversity and strength through unity, and pure, meritocratic equality. It was about the idealistic dream made real, by a future that had dropped all the petty bullshit and simply grasped the ideal, embracing unity as the priority value above all other considerations. And it always should be.   But Star Trek was also, it turns out, slightly naïve in its reassurances, in a way that for all my decades-long love of the show (and films) in (almost) all of their forms, I couldn’t entirely stomach in 2017.

I do love Trek, and I always have. I grew up on re-runs of the original series, and am ancient enough to remember The Next Generation the first time around. In my imaginary sci-fi family, Picard is my noble space-dad, Kirk is my slightly bad influence cool-uncle, and Data is my nerdy little brother. I love them all dearly, and at their peaks, they were the perfect characters for positively exploring the moral, navigational challenges of their times. But they wouldn’t have been up to dealing with 2017. In 2017, Star Trek’s bluntly optimistic, idealised view that progress always pushes through just wouldn’t work. Because, well, it didn’t.

It’s all very well expecting Star Trek to always be the straightforward, shining beacon of hope and progress, but really, that has limited value. At times of unity and progress, or at least times of optimism for the same, Star Trek’s depiction of a world that has made it, that has realised the dream of peace and prosperity for all, is a perfect and necessary celebration of where we are, or at least where we’re heading. But at the same time, an important part of Star Trek has always been the allegorical exploration of the tricky issues of any given time, and to be truly effective it has to be honest about those issues. And at times like this, a blanket ‘It’ll all be fine’ will not allow Star Trek to be effective. Because we tried that too. And it didn’t work.

Right now, a simple Star Trek of old, where we can solve any problem within a self-contained 45-minute run-time if we just sit down and Be Progressive at an issue until it goes away, wouldn’t fill me with air-punching celebration. It would probably make me say ‘Fuck off, Star Trek’. And I never want to say that to Star Trek.

So while I’d like to see a Federation where things are going just great, to maintain a meaningful, Star Trek vision of the future, Discovery has to explore (while holding on to hope and optimism), a meaningful view of now. So it makes sense that Discovery – a prequel set in the pre-Kirk, early days of the Federation – depicts a well-meaning but not-yet-there version of Starfleet. But it’s fundamentally important that Discovery also depicts a Starfleet that, after years of confidence in the value of its progressive universal view, is now in disarray, trying to work out just what the hell you do when such certain and simple values are dealt a haymaker by a naysaying group you’d long forgotten about.

What happens when your certainty in your own viewpoint has conveniently written any opposition out of the equation, and your complacency has led to a sudden and unexpected clobbering? Just how do you maintain hope and optimism when pure hope and optimism is the very foundation of your being entirely under-equipped for the current challenge? And how do you even carve a path to an answer, if the shock of that realisation has even the good guys tearing themselves apart with ideological division? If Star Trek is to continue being Star Trek, then it has to deal with the questions of the day. And today those are the questions.

Where no-one has gone before

And if Discovery is to properly explore them, then its form needs to fit its function. So it also makes total sense that we now follow an individual’s personal story rather than the perspectives of a full crew. Because to properly understand and navigate the confusion of a Federation caught between many possible responses, we need to follow a person torn between those same influences. That’s why Burnham’s journey from outcast human-vulcan cultural hybrid, to outcast mutineer, to outcast not-quite member of the Discovery crew, is important. This is the story of someone whose old, assumed-correct identities didn’t get the job done. It’s a story of adaptation, and how one looks beyond the accepted normal to find a new identity that has answers for a new situation.

That’s why Burnham’s abortive rebellion at the start of the series – although initially questionable – makes total thematic sense, She’s trying to apply cold logic to a situation where the warmer, hopeful Starfleet doctrine has failed. And then logic fails as well. Because sometimes they both do, and then you really have to go soul-searching. And that’s just where we are now.

Discovery hasn’t lost Star Trek’s spirit of hope. It’s just exploring it through a more troubled time. The question this time around is not ‘How does our optimistic certainty solve this problem?’, but ‘How do we rebuild and maintain our optimistic certainty when everything it built just fell on its ass?’ The desire to strive and improve remains constant, but Discovery has to explore a different stage of the journey to that enjoyed by the Captains of the more comfortable periods that come later.

So that journey is personified not by a wide ranging, thoroughly bonded group of super-space-friends, but by individuals trying desperately to work themselves out. Burnham, both human and vulcan, is wrestling with the intellectual and the emotional, trying to find answers somewhere between the two. Bumbling cadet Tilly, showing Starfleet officers as human, flawed, and awkwardly incapable for the first time, represents the youthful naivety of a young Federation that has the right idea, but which lacks the experience or tools to be effective. Doug Jones’ super-straightlaced Saru, through his complex relationship with Burnham, personifies the struggle of Starfleet’s rule-following, by-the-book correctness to reconcile personal feelings and moral greyness.

But crucially, none of them is going in the right direction. Not alone, anyway…

And that, really, is fundamental to Discovery’s respectful rethink of Star Trek ideology. This isn’t the clear-cut story of adventures in a successful Federation, complete and fully formed. It’s the story of the stumbling early days. The days when our belief that we’d solved all the problems only betrayed how much we still had to learn. It’s Star Trek set in and made for a period when hopeful allegory has to be realistic rather than purely idealistic.

And as shocking as that might be on first watch, this isn’t the first time that has happened. The early years of The Next Generation were plagued by battles between writers, producers, and Trek architect Gene Roddenberry over the show’s scope to tell meaningful stories amid its creator’s demand for all positivity, all the time. But ultimately, real-world issues, politics, and traumas made their way into the 24th century - albeit in a ‘90s-friendly way - and TNG is all the better for it.

So, much like the Federation being depicted, I rather think that Discovery shouldn’t be judged upon initial, surface response. It shouldn’t be decried for not being what one thinks it ‘should’ be, but rather (as Trek itself has often espoused, in regard to many a subject) accepted for what it is, its uniqueness appreciated for its own values. It can’t be the Star Trek that has gone before, in terms of the year in which it’s set, or the year in which it’s made. And nor should it be.

Because this is not the story of the end goal, but rather of the troubled journey to get there. It’s a story about over-reaching, getting complacent, taking a hit, and then rebuilding, however you can. And really, for all the darkness, death and dismay at hand, spiritually there’s nothing more Star Trek than that.