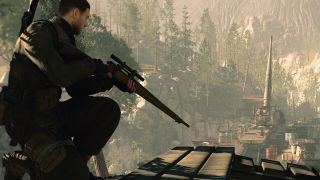 Think of Sniper Elite and one thing pops to mind. Pop being the operative word. The series’ now legendary Kill Cam has sent players questing for its elusive ball busting ‘testikills’ since Sniper Elite V2, but there’s so much more to Rebellion’s stealthy WW2 franchise than just satisfyingly gory X-Ray bullet time. While Sniper Elite 3’s trip to Africa brought in more open environments and stealth, the fourth adventure of grizzled sniper Karl Fairburne hands over even bigger maps in war torn Italy that will take literally hours to fully explore.

A case in point is my experience with the very first hands on with Sniper Elite 4. Rebellion drops me in midway through a level where Nazis stalk a bridge that happens to need blowing up. I immediately realise this is much easier said than done. There are soldiers everywhere, and the fact there’s only one of me suddenly feels distinctly more grim than usual. Unlike the Hunger Games, the odds are not in my favour. Sniper Elite requires some serious stealth: go in all guns blazing and chances are you won’t live particularly long.

I end up spending five precious minutes gazing at enemies through binoculars and meticulously tagging everything that moves before finally taking a shot at a lone guard on a lower platform of the bridge. Obviously your rifle will draw attention but mercifully there are mortars firing every minute or so. Pull the trigger while the helpful indicator on the screen appears and no one will be any wiser.

Lining up your shot in Sniper Elite is no less satisfying than previous iterations. I bring up my scope, find my target and let out a breath with R1 (and in real life). On the setting I’m playing on, this focus time will allow Karl to see a red dot where the bullet will land. Ballistics purists can of course turn this off and judge their own physics and wind speed, but there’s immense gratification for timing your shot just right and following a slow motion bullet to its target. Now there’s just the small matter of the 25 soldiers in the village to get past before I can even get to the bridge.

“In Sniper Elite 3 we wanted to improve the stealth mechanics so you could actually behave more stealthily than it just devolving into a long range pop up shooter. That’s fun, but we wanted to add more depth to it,” explains Rebellion lead creative Tim Jones. “This time around for Sniper Elite 4, we’re just taking it to another level. We’re improving and souping up every aspect of the game. Probably some of the most obvious things are the increase in scale of the environments. This offers up much more of the long range sniping that fans have been calling for and the nonlinear nature of things is being taken even further.”

Maps are packed with primary and secondary objectives and while exploring, Karl is much more agile than the series has ever allowed. He can hang off ledges, get onto rooftops and find his way to new areas to find perfect sniping spots. And the whole time he’s being hunted by much smarter AI. Previously soldiers would hunt for you in the last place you were spotted and go back to business but it’s significantly harder to escape now. I miss the mortar fire to hide a shot and every guard in the area descends on me as cries of 'sniper!' echo across the village. A spinning red triangle icon appears on the map and for your best chances of survival you need to get as far away from that as possible. Enemies are far more intelligent and instead of just forgetting that their colleague has been brutally slain after a set amount of time, will stay around the area and hunt. It’s then up to you to work out how to dispatch them.

“This time around not only are the environments bigger but all the AI are active all the time on the whole map as well so it’s emergent gameplay if you will,” confirms Jones. “We’re not scripting it so that everything turns on when you get into a certain area. It’s all there all the time. It’s a genuine sandbox for you to play in.” And there’s plenty of new additions and tweaks to that sandbox. Opening up the weapon wheel on L1 has a sea of different kinds of sneaky traps to set, and there’s been plenty of tweaks and additions to let us get even more inventive. I decide to lay a standard mine in the middle of the road, planning to lure a soldier to it with a whistle blast from a safe hiding spot in some nearby bushes.

“We’ve got the S mine which was affectionately known as the Bouncing Betty. You plunge it into the ground and then someone triggers it, it pops up and fires shrapnel out in all directions,” Jones explains. “We’ve got the trip mines as well. They’ve got secondary uses as well so trip mines you can now string multiple ones together. You can set the mines to require two presses instead of just one to fire off. It’s quite an advanced behaviour but if you’re waiting for a patrol to go by and the first person doesn’t trigger the mine because they click it once and go past, then the mine goes off when it’s in the middle of the group. It’s stuff like that that adds another layer and gives more options to the player.”

There’s even a new trap cam to add to your gory repertoire. Place your mine in prime position, wait and you’ll get a slow motion explosive shot of your foes disintegrating. This even works if you’re miles away from your trap. Lay one down and if AI doesn’t do what you want them to at the time, chances are that they might in the future and this constantly active map means that you might get a bloody surprise just a bit further down the line.

The area I’m exploring feels rich with possibilities and even in the short time I have with it it’s clear that Rebellion has upped SE4’s stealth game significantly. I don’t get time to find the officer with a list of his reports which automatically tags soldier positions for you, or to try out that delayed trap cam, but knowing that there’s little additions like this just makes this an even more appealing world to play in. The choices on offer create a beautifully deadly sandbox to test your stealth skills that’s definitely worth waiting for its new February 2017 release date. Keep it in your sights.