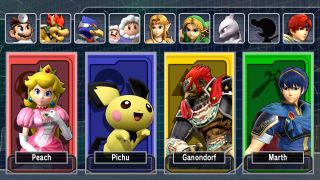 Smash Ultimate is gonna do a tournament event dedicated to Super Smash Bros Melee! I did a comparison from the new artwork of the menu screen from melee to the original and its pretty spot on! 👍🏻 pic.twitter.com/D7ivdMQuG8January 1, 2020

The Melee-inspired Smash Bros. Ultimate event throws player together in two-and-a-half-minute timed matches. The characters and stages you choose will be limited to those available on the Smash Bros. Melee roster, same as the items that appear in matches. Item drops will be set to medium frequency and the Final Smash meter will be turned on.

Super Smash Bros. Melee has long been the competitive eSports community's favored Smash Bros. entry, and it doesn't look like Smash Bros. Ultimate will steal that crown despite a fairly active competitive scene. With this latest themed event, it seems Nintendo is keenly aware of Melee's rank in the competitive hierarchy, as we've yet to see a similar event themed around any of the other entries.

You have until 10am PT / 1pm ET / 6pm GMT on Monday, January 6 to take part in the nostalgia-fueled festivities. Here's the announcement straight from the Smash Bros. Japan Twitter account.

It's always fun to revisit the days of gaming past, but older isn't always better. Here are the best upcoming games of 2020 and beyond.