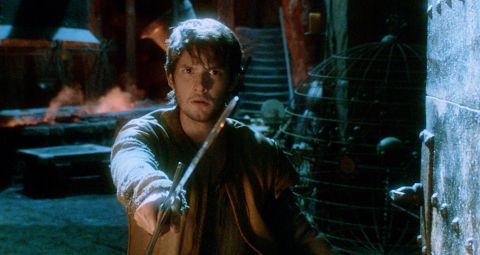 A swollen budget, a mini-Big Lewbowski reunion, and top-notch digital effects fail to enliven proceedings in yet another ho-hum dragon chaser based on a YA novel.

Its release repeatedly pushed back, Seventh Son sadly warrants the bad buzz. It’s a YA fantasy based on Thomas Seigel’s The Spook’s Apprentice, part of a 14-book series. Somewhere in there they probably explain all this crazy bullshit, but we can only go by what we’re seeing on the screen.

Julianne Moore is Mother Malkin, a witch who turns into a dragon sometimes. Jeff Bridges is Master Gregory, a crusty old long-bearded wizard who gets a new apprentice, Tom (Ben Barnes) to help him fight the witch-dragon and attain some sort of mystical jewel she covets. Tom is in love with the enchanting Alice (Alicia Vikander), Malkin’s niece, who is also a witch, although we are unsure whether she is of the evil dragon variety or the helpful, pixie-witch kind.

The bulk of the movie finds the titular Tom and his growly boss tromping through a standard fairyland, fighting demons and ogres and, you imagine, a healthy dose of embarrassment. To be fair, director Sergei Bodrov (Mongol) delivers a sumptuous digital kingdom. His CGI-enhanced landscapes are filled with all manner of magic, from foreboding gray-walled castles whose spires stretch into the clouds to intricate monsters and ghouls so life-like you can almost smell their fetid breath.

And that’s really the problem. If this was the ’80s, Seventh Son would be camp gem Beastmaster, and the dragons would be made of paper-mache and rubber cement. Here, though, instead of a few cheap kicks, you end up lamenting all the money (a reported $95m budget) and effort invested in a film that plays like the most disposable Saturday-matinee fodder imaginable.

A swollen budget, a mini-Big Lewbowski reunion, and top-notch digital effects fail to enliven proceedings in yet another ho-hum dragon chaser based on a YA novel.